India were bowled out for 107 in their first innings as James Anderson claimed 5/20. 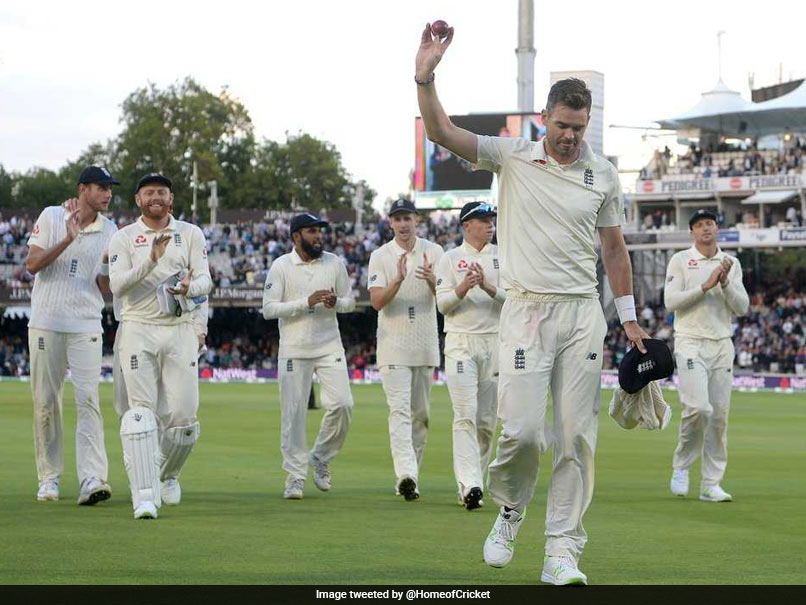 James Anderson ended the day with figures of 5/20.© Twitter

James Anderson claimed his sixth five-wicket haul at Lord's as India were bowled out for a paltry 107 in their first innings on Day 2 of the 2nd Test on Friday. Ishant Sharma was the last Indian wicket to fall, bringing an end to India's innings as well the day's play. Ravichandran Ashwin (29) was the top scorer for India while skipper Virat Kohli was the other main contributor with a hard-fought 23. England pacers were almost unplayable in testing conditions for the Indian batsmen. Besides Anderson, Chris Woakes took two wickets while Stuart Broad and Sam Curran chipped in with a wicket apiece.

India, put into bat under overcast conditions, yet again failed to get a solid start as Anderson ran through the top-order. The 36-year-old bowler was right on target removing Murali Vijay (0) with a delivery that pitched on the middle stump line and moved enough to beat Vijay's outside edge.

KL Rahul (8) lazily nicked a delivery as India lost their openers in very first session in which only 6.3 overs were bowled.

Cheteshwar Pujara (1) left a lot of deliveries but was once again run out trying a quick single with his skipper Virat Kohli backtracking after initially responding to a call.

The only hope was the skipper himself and his deputy Ajinkya Rahane (18), who had scored a memorable century in 2014.

With the conditions adverse, not for once did the Kohli-Rahane duo look settled during their 34-run stand off 13.1 overs.

If Anderson wasn't troubling them with the off-stump channel, then it was comeback man Woakes, who was ready to make life miserable for the duo. Replacing first Test hero Ben Stokes, Woakes repeatedly hit the seam and got it to nip away from the right handers beating the bat innumerable times.

Finally, Kohli (23) who had battled hard for 70 minutes and 57 balls was forced into committing a mistake by Woakes.

A delivery that pitched on middle stump hit the seam and Kohli closed his bat face with a leading edge being gobbled at slips by Jos Buttler.

Hardik Pandya (11) didn't learn from his mistake as he was dropped by Buttler at second slip and played a similar shot with hard hands to be caught by the same fielder, the very next ball.

Dinesh Karthik (1) was clueless as Curran got one to dart back in as it breached his defences. Rahane's patience gave away as Anderson coming for his second spell bowled a beauty to force him to edge one to the slips as India's resistance ended in a jiffy.

It was Ravichandran Ashwin's 29 that ensured that India crossed the three-figure mark as England gained complete control despite a day and half's play being already lost due to inclement weather.

James Anderson England vs India, 2018 Cricket England vs India, 2nd Test
Get the latest updates on IND vs NZ 2021, check out the Schedule and Live Score . Like us on Facebook or follow us on Twitter for more sports updates. You can also download the NDTV Cricket app for Android or iOS.