In typically overcast conditions, Rahane is hopeful that India could bowl the hosts out early and get themselves back into the contest. 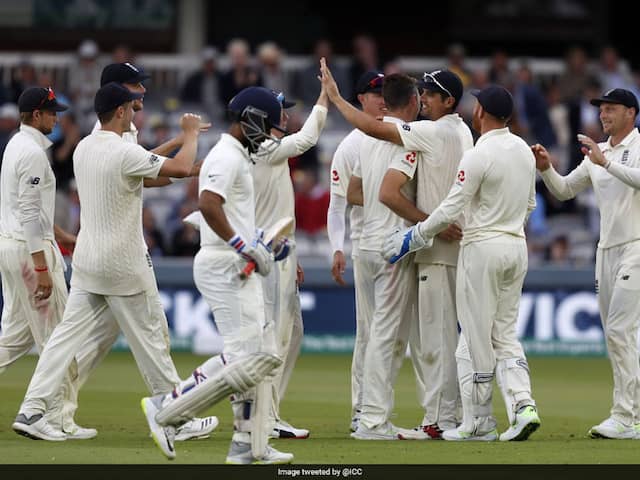 Ajinkya Rahane scored a 44-ball 18 and admitted that batting was a difficult prospect at Lord's.© Twitter

India were bundled out for a paltry 107 on the second day of the Lord's Test and their performance with the bat was reminiscent of their poor showing four years ago. However, Ajinkya Rahane believes that the visitors can still bounce back from the dire situation. "You never know, the match can still be interesting if we get them out early and bat well in the second innings," he told icc-cricket.com on Friday. James Anderson's 5/20 troubled every Indian batsman, and the 38-ball 29 scored by Ravichandran Ashwin was the highest score on the visitors' woeful scorecard.

"We need to believe. Belief is important. There's a long way to go in this match. You never know, the series can still be 1-1 at the end of this match."

Rahane scored a 44-ball 18 and admitted that batting was a difficult prospect, but he credited Anderson for keeping on the pressure.

In typically overcast English conditions, almost perfect for swing bowling, Rahane is hopeful that India could bowl the hosts out early and get themselves back into the contest.

"And that is really crucial on this wicket. If you're bowling that length, you got to bowl consistently, then as a batsman, you have to leave the ball, or you've got to back your methods consistently."

Rahane added that the stop-start nature of the day didn't help matters, with the players having to rush back to their dressing rooms twice due to rain interruptions.

"It's not easy when it's start-stop but there are no excuses at the highest level," he said.

"England bowled well. They used the conditions really well. I'd like to give credit to them."

James Anderson Lord's, London England vs India, 2018 Cricket England vs India, 2nd Test
Get the latest Cricket news, check out the India cricket schedule, Cricket live score . Like us on Facebook or follow us on Twitter for more sports updates. You can also download the NDTV Cricket app for Android or iOS.