A fourth-wicket partnership of 159 between Kohli (97) and vice-captain Ajinkya Rahane (81), that spanned more than 40 overs, revived India. 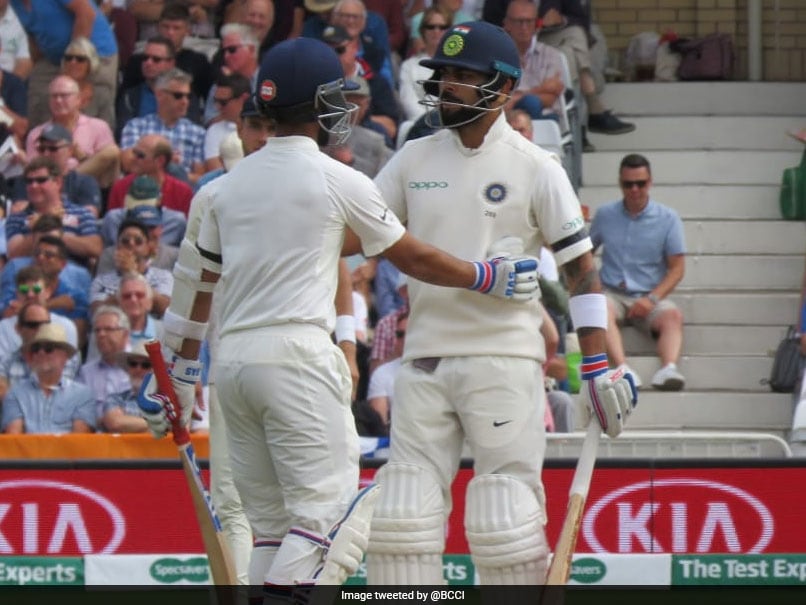 India captain Virat Kohli fell three runs short of a hundred but had the satisfaction of leading an India batting revival on the first day of the third Test against England at Trent Bridge on Saturday. At stumps India were 307 for six after losing the toss. A day of fluctuating fortunes ended when James Anderson, England's all-time leading Test wicket-taker, struck with the new ball to have Hardik Pandya (18) caught by Jos Buttler at second slip. That meant Anderson, who prior to this match had 60 Test wickets at Trent Bridge at just 18.95, had become only the second bowler after Sri Lanka's Muttiah Muralitharan to take 100 Test wickets against India.

Earlier India, sent in to bat at 2-0 down in a five-match series on a ground renowned for aiding swing, were in trouble at 82 for three come lunch.

Chris Woakes took all those wickets en route to figures of three for 75 in 20 overs.

But a fourth-wicket partnership of 159 between Kohli (97) and vice-captain Ajinkya Rahane (81), that spanned more than 40 overs, revived India.

Unfortunately for India, neither batsman reached three figures with Kohli -- who made a brilliant first Test century in England in the series opener at Edgbaston -- dismissed when he edged an intended drive off an Adil Rashid leg-break to Ben Stokes at slip.

Much of the pre-match attention had been focused on Stokes, recalled just days after his acquittal on Tuesday by a court on an affray charge that stemmed from a fight outside a Bristol nightclub in September last year.

But until his catch to dismiss Kohli, it had been a frustrating day for Stokes, whose 15 wicketless overs cost 54 runs.

India were well-placed at 60 for none when Woakes took two wickets for one run in nine balls to remove both openers, with Shikhar Dhawan (35) caught at second slip before KL Rahul (23) was lbw.

And on the stroke of lunch, Cheteshwar Pujara hooked Woakes, man-of-the-match after scoring a maiden Test century in England's innings and 159-run win in the second Test at Lord's last week after replacing Stokes, straight to Rashid at long leg.

But Kohli, who on Friday had urged India "to stand up" was as good as his word, while showing no sign of the back trouble that hampered him at Lord's as he and Rahane treated an engrossed crowd to a traditional top-order Test partnership.

It was a fitting way for India to honour former captain Ajit Wadekar, whose death aged 77 was announced on Wednesday, as were the black armbands they wore in memory of the first India skipper to enjoy a Test series victory in England, back in 1971.

After tea, Rahane had moved on to 57 when Anderson just failed to hold what would have been a spectacular catch at backward point following a flashing edge off Woakes.

Kohli was in superb touch, a gentle push off Woakes speeding down the ground for four.

Rahane eventually fell when he edged Stuart Broad, bowling on his Nottinghamshire home ground, and Alastair Cook at first slip held a brilliant left-handed catch off a chance that really belonged to motionless wicket-keeper Jonny Bairstow.

Rashid, having not been required to bat or bowl at Lord's, then had Kohli, to the star batsman's evident fury, taken by Stokes to end a 152-ball innings including 12 fours.

But debutant wicket-keeper Rishabh Pant (22 not out), was undaunted, the left-handed batsman scoring his first Test runs in style when, to just his second ball, the 20-year-old left-hander went down the pitch to drive Rashid for six.

Ajinkya Rahane Trent Bridge, Nottingham England vs India, 2018 Cricket England vs India, 3rd Test
Get the latest updates on India vs South Africa and check out  Schedule, Results and Live Score. Like us on Facebook or follow us on Twitter for more sports updates. You can also download the NDTV Cricket app for Android or iOS.