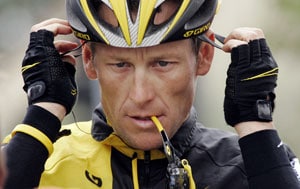 The U.S. Anti-Doping Agency accuses Armstrong of using steroids and blood boosters to win the Tour de France from 1999-2005, and leading a complex doping program on his teams. If found guilty, he faces a lifetime ban from the sport and could be stripped of his titles.

Armstrong denies doping and has sued to block the case. He argues USADA's investigation and arbitration process are unfair and violate his constitutional right to due process. Armstrong also claims the International Cycling Union, the sport's governing body, should have jurisdiction and the union has come to his defense.

Judge Sam Sparks will not rule on the evidence against Armstrong, but will consider his claims on due process and jurisdiction. USADA officials want Sparks to dismiss the lawsuit and allow their case to go forward.

If Armstrong's lawsuit is dismissed, he could appeal to the New Orleans-based 5th U.S. Circuit Court, take his case to arbitration under USADA rules or quit the fight and accept sanctions.

Armstrong had faced a Monday deadline to decide whether to take his case to arbitration, but USADA agreed to extend the deadline to Aug. 23 while his lawsuit is pending.

USADA, recognised by Congress as the official anti-doping agency for Olympic sports in the United States, insists it has jurisdiction under UCI rules, the U.S. Olympic Committee and the World Anti-Doping Agency. USADA and UCI filed court documents claiming jurisdiction up to late Thursday.

The U.S. Anti-Doping Agency charged Armstrong in June, about four months after a federal grand jury investigation of the cyclist ended four months earlier without any indictments.

Doping charges were also levied against five others associated with his teams during his Tour de France victories. Three cases are still pending and two doctors who worked with the teams have been issued lifetime bans.

USADA officials say they have up to 10 former Armstrong teammates and associates willing to testify against him, and blood samples from 2009-2010 that are "fully consistent" with doping.

Armstrong says he has undergone more than 500 drug tests without testing positive. Armstrong retired from cycling in 2011.