In a video posted by Yuvraj Singh on his Twitter, his son Orion was seen sitting on his father's lap and watching the 2007 match, where Yuvraj had hit the six 6s off the bowling of Stuart Broad 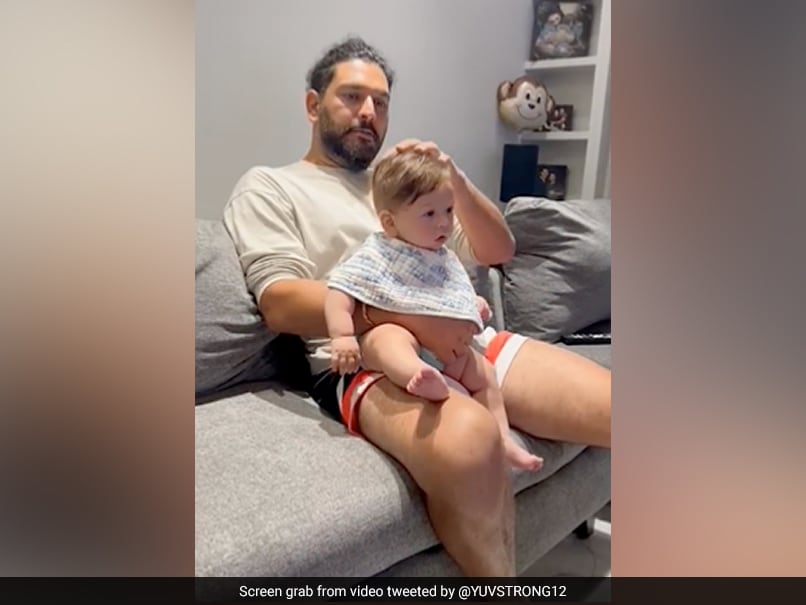 Former India all-rounder Yuvraj Singh, who hung his boots from all forms of international cricket in 2019, has been of the most powerful batters, the country has ever had. The Punjab-born cricketer rose on many occasions to take Team India through the line in tough matches. In every format, Yuvraj gave a remarkable performance and achieved many milestones. One such milestone was achieved, during the 2007 T20 World Cup clash against England, when Yuvraj hit six consecutive 6s off the bowling of Stuart Broad.

In the 2007 T20 World Cup game against England, Yuvraj got after Broad in the 19th over of the game as he smashed six 6s in a row to bring up his 50 off just 12 balls. In the end, he played a knock of 58 runs off just 16 balls to help India post 218/4 in 20 overs. India eventually went on to win the match by 18 runs, and the left-handed batter Yuvraj had also played a crucial role in the semi-finals of 2007 T20 World Cup. India had eventually won the competition by defeating arch-rival Pakistan in the final.

Celebrating the 15 years of his knock against England, Yuvraj had a very special "partner" to revisit that day, and the partner was none other than his 9-month-old son, Orion Keech Singh. In a video posted by Yuvraj Singh on his Twitter, his son Orion was seen sitting on his father's lap and watching the 2007 match, where Yuvraj had hit the six 6s off the bowling of Stuart Broad

"Couldn't have found a better partner to watch this together with after 15 years," tweeted Yuvraj.

Currently, he is featuring in the Road Safety World Series and representing India Legends, led by Master Blaster Sachin Tendulkar.

Stuart Broad Cricket
Get the latest updates on Fifa Worldcup 2022 and check out  Fifa World Cup Schedule, Stats and Live Cricket Score. Like us on Facebook or follow us on Twitter for more sports updates. You can also download the NDTV Cricket app for Android or iOS.