Yuvraj Singh, who is currently out of the India cricket team, played for Kings XI Punjab (KXIP) in the recently concluded Indian Premier League (IPL) 2018. 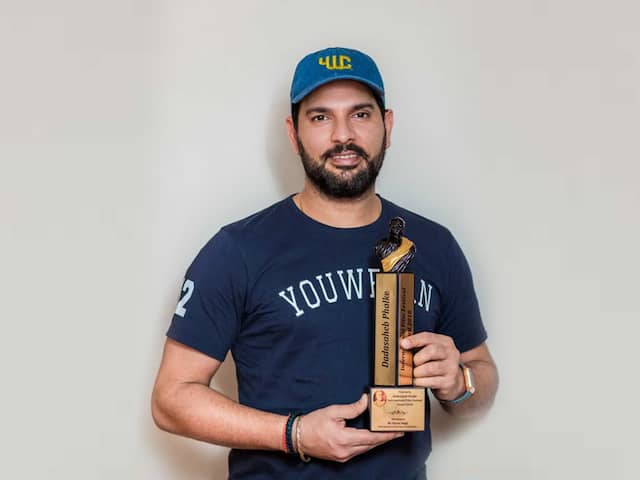 Indian star cricketer Yuvraj Singh has been awarded the 'most inspiring icon of the year for Social Welfare" award by the Dadasaheb Phalke International Film Festival (DPIFF) for his exemplary contribution in the field of social welfare. Yuvraj, who was a member of India's 2011 World Cup winning squad, was diagnosed with cancer (mediastinal seminoma) shortly after the World Cup. After successfully completing his chemotherapy cycle in the United States, Yuvraj returned to India in 2012 and made his international comeback in a Twenty20 match against New Zealand. Post his diagnosis, Yuvraj opened his foundation 'YouWeCan' that focuses on creating cancer awareness and helping educate the cancer survivors kids.

Yuvraj Singh, who is currently out of the India cricket team, played for Kings XI Punjab (KXIP) in the recently concluded Indian Premier League (IPL) 2018.

KXIP had acquired the services of Yuvraj for Rs 2 crore in the IPL 2018 auction earlier this year. While much was expected of the southpaw, he could not live up to the expectations.

During the tournament, Yuvraj registered an unwanted record. His strike-rate of 91.42 was the worst for any player that has faced 50 or more balls this season.

Yuvraj, who had a dismal IPL 2018, had mentioned that Indian players have had an opportunity to observe and learn from "phenomenally talented players" that come together during the cash-rich league tournament.

"We have a different comfort level and, all in all, a much better equation as players of the game. Obviously when we don the national colours, we are all playing for our country and that is the passion that drives us to give it our best," he said.

Comments
Topics mentioned in this article
India Cricket Team Yuvraj Singh Cricket
Get the latest Cricket news, check out the India cricket schedule, Cricket live score . Like us on Facebook or follow us on Twitter for more sports updates. You can also download the NDTV Cricket app for Android or iOS.