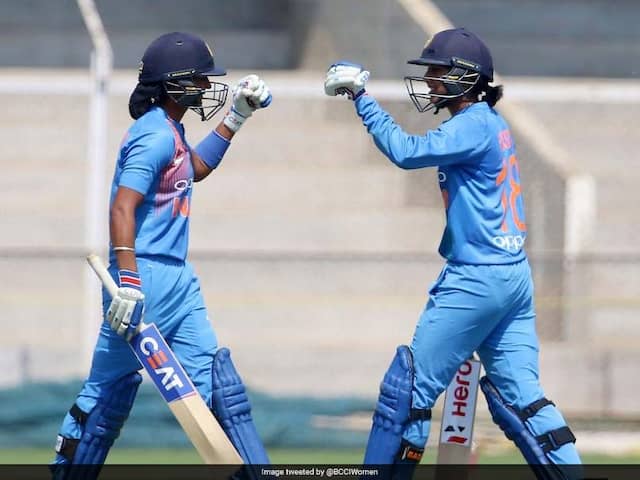 The Indian women's cricket team put in a brilliant all-round performance to outclass Pakistan and reach the final of the Women's Asia Cup T20 tournament at the Kinrara Academy Oval, Kuala Lumpur on Saturday. India, chasing their seventh straight title, restricted Pakistan to a paltry 72 for seven with Ekta Bisht starring with the ball. Despite losing Mithali Raj (0) and Deepti Sharma (0) early, a 65-run third-wicket between Smriti Mandhana (38) and captain Harmanpreet Kaur (34 not out) saw India home in 16.1 overs.

India are currently top of the table with eight points from 5 matches. Pakistan are second, joint on six points with Bangladesh but have played a game more.

The outcome of the match between third-placed Bangladesh and hosts Malaysia will determine who will face India in the final.

A win for Bangladesh will see them through but a loss would mean a repeat of the India vs Pakistan clash for the Asia Cup T20 title.

Electing to bat, Pakistan folded up for a meagre 72/7 with Sana Mir (20 not out) and Nahida Khan (18) managing to reach the double figures in a lacklustre batting effort.

In response, skipper Harmanpreet Kaur and her deputy Smriti Mandhana steered the Indians to a comfortable victory with 23 balls to spare after starting on a shaky note.

Earlier, left-arm spinner Ekta Bisht spun a web around the Pakistanis with three wickets, and was well assisted by the other Indian bowlers who stuck to a disciplined effort.

During their chase, India too got off to a forgettable start, losing former skipper Mithali Raj and Deepti Sharma for ducks with the scoreboard ticking 5/2.

But thereafter the defending champions did not look back as the left-right combo of Smriti and Harmanpreet forged a brilliant 65-run third wicket stand to take the side within sniffing distance of victory.

Pakistan Women Mithali Raj Smriti Mandhana Harmanpreet Kaur Ekta Bisht Cricket
Get the latest Cricket news, check out the India cricket schedule, Cricket live score . Like us on Facebook or follow us on Twitter for more sports updates. You can also download the NDTV Cricket app for Android or iOS.