"Wish He Was In My 2003 World Cup Team," Writes Sourav Ganguly

While writing his autobiography 'A Century is Not Enough', Ganguly made a lot of revelations on his playing days, one of which was his assessment on another India captain Mahendra Singh Dhoni. 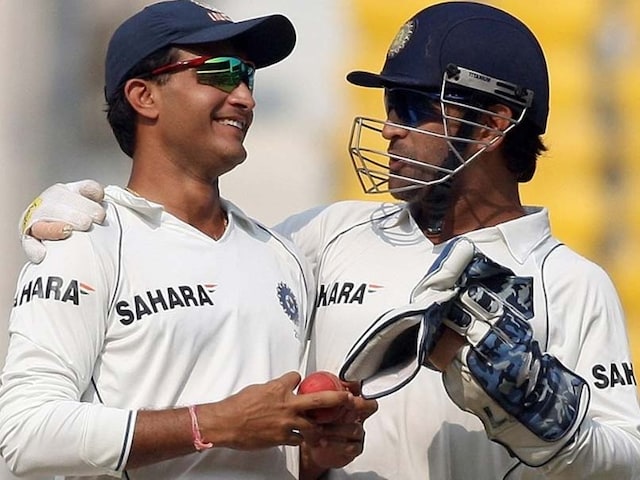 MS Dhoni asked Sourav Ganguly to captain the side on the last day of his career.© AFP

Former India captain Sourav Ganguly is known to be one of the greatest captains that India have produced. While writing his autobiography 'A Century is Not Enough', Ganguly made a lot of revelations on his playing days, one of which was his assessment on another India captain Mahendra Singh Dhoni. Dhoni made his debut for India when Ganguly was the captain and the 45-year-old was instrumental in shaping his career from a wicket-keeper to a recognised top-order batsman. In one such instance, Ganguly had promoted Dhoni to number 3 which saw the man from Ranchi come into his own and from then on there was no looking back for Dhoni.

"I had over the years constantly looked out for players who remain steady under pressure and possess the capability to change the course of the match. Mahendra Singh Dhoni, who came to my notice in 2004, was a natural progression of this thought. I was impressed with MS Dhoni from day one," Ganguly wrote in his autobiography.

"I wish I'd Dhoni in my 2003 World Cup team. I was told that when we were playing the 2003 World Cup final he was still a ticket collector with Indian Railways. Unbelievable!" added the former India skipper.

"Today I am happy that my assessment was proven right. It is amazing how he broke through the ranks to become what he is today," added Ganguly.

Ganguly played his last international match for India in November 2008. The former India captain's final outing was the 4th Test against Australia in Nagpur. As the match drew to a close, Dhoni asked Dada to lead the side for one final time, as the Indian cricket fans bid goodbye to an iconic batsman and captain.

India also became the No 1 Test side under Dhoni's leadership.

Comments
Topics mentioned in this article
India Cricket Team Sourav Ganguly MS Dhoni Cricket
Get the latest Cricket news, check out the India cricket schedule, Cricket live score . Like us on Facebook or follow us on Twitter for more sports updates. You can also download the NDTV Cricket app for Android or iOS.