England were bowled out for 77 but hit back in limiting the Windies to 127 for six in their second turn at the crease. 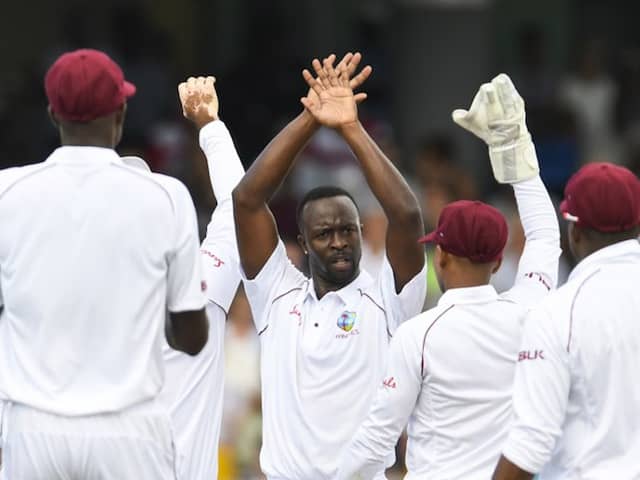 Kemar Roach took five for 17 as England were bowled out for 77 in their first innings.© AFP

Kemar Roach spearheaded a devastating Windies fast bowling effort to rout England for 77 in their first innings and put his team in a commanding position on the second day of the first Test at Kensington Oval in Barbados on Thursday. At stumps, England had hit back in limiting the Caribbean side to 127 for six in their second turn at the crease. However, the hosts already have a formidable overall lead of 339 runs at the end of a day dominated by bowlers with 18 wickets falling.

If that trend were to continue into day three then England are likely to struggle to avoid suffering defeat inside three days, the same fate they suffered when the two teams last met at this venue in the finale to the previous tour in 2015.

It will take tremendous resolve by Joe Root's side to regain their composure at the crease after being swept aside so ruthlessly first time round.

Replying to the home side's first innings total of 289, highlighted by a top score of 81 from Shimron Hetmyer and James Anderson's 27th five-wicket innings haul, the visitors were blown away in 30.2 overs of unrestrained aggression from all four members of a pace attack in which the shortest of the quartet, Roach, stood tallest.

His haul of five for 17 from 11 overs recaptured his best form of earlier years before his career was threatened by a serious shoulder injury.

"The ball came out pretty well. I am happy with the performance today," said Roach.

"The pitch has toughened up for the batsmen. It is a bit jumpy and uneven. The aim was to make the batsmen play as much as possible."

Captain Jason Holder and Alzarri Joseph snared two wickets apiece while Shannon Gabriel, the fastest of them all, had to be satisfied with the lone wicket of Sam Curran.

It was England's preference for Curran as opening bowling partner to Anderson, ahead of the experienced Stuart Broad which was one of the main talking points on the opening day.

Given Curran's lack of success with the ball and the West Indies bowlers' first innings domination it is likely to be a discussion intensified many times more by the end of day two.

After Anderson and Ben Stokes had taken the final two Windies wickets for the addition of 35 runs, England, from 30 for one at lunch, were rocked onto the back foot at the start of the afternoon session courtesy of Roach.

Opener Rory Burns played on while Jonny Bairstow was bowled off his elbow as the hosts sought to exploit the oft-proven vulnerability of the England top-order.

Holder then claimed the prized wicket of his opposite number when Root (four) was trapped leg-before. Stokes fell in similar manner to Roach shortly after and Moeen Ali top-edged his first delivery to be well caught by Joseph on the fine-leg boundary.

While he could not complete the hat-trick, Roach would not be denied a five-wicket haul which he achieved when Joss Buttler was caught behind.

England had lost five wickets for five runs to be reeling at 49 for seven, and although Curran and Adil Rashid struck a couple boundaries apiece it could not prevent Joseph and Gabriel finishing off the job to put their team in complete control.

That sense of assurance may have wavered late in the day when they slipped from 52 without loss to 61 for five, off-spinner Moeen Ali leading the effort with three wickets.

But Hetmyer belted an aggressive 31 in adding 59 for the sixth wicket and although he fell to Curran in the last over of the day, Holder, who chose not to enforce the follow-on, and Shane Dowrich will be looking to extend the West Indies advantage deep into the third day.

James Anderson West Indies vs England, 1st Test Cricket
Get the latest Cricket news, check out the India cricket schedule, Cricket live score . Like us on Facebook or follow us on Twitter for more sports updates. You can also download the NDTV Cricket app for Android or iOS.