James Anderson took on the double role of stock and strike bowler to finish the day with the impressive figures of four for 33 from 24 miserly overs. 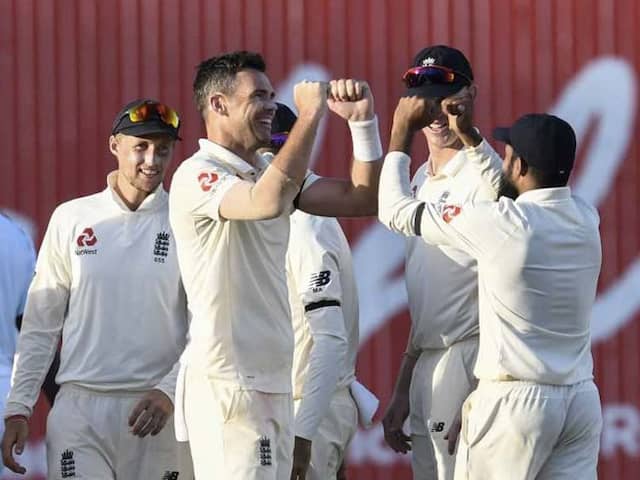 James Anderson spearheaded a late England assault with the second new ball to reduce the Windies to 264 for eight at stumps on the opening day of the first Test at Kensington Oval in Barbados on Wednesday. With long-standing fast bowling partner Stuart Broad dropped from the final 11 to accommodate an additional spinner, Anderson took on the double role of stock and strike bowler to finish the day with the impressive figures of four for 33 from 24 miserly overs. Three of those wickets came in an eventful final session, including two with the second new ball as a previously placid pitch suddenly offered disconcerting bounce to a Windies middle and lower order which crumbled against the renewed energy and hostility of the visitors.

Having chosen to bat first despite selecting four faster bowlers in their line-up, including captain Jason Holder, the hosts were paced by half-centuries from Shai Hope, Roston Chase and Shimron Hetmyer to the relative comfort of 240 for four in the final session.

Anderson, the most successful fast bowler in Test history with a tally of wickets that now stands at 569, had Hope caught behind off the inside edge for 57 to claim his first wicket of what had previously been a frustrating day for the senior seamer.

"I thought it was going to be another quiet game for me at tea," said Anderson at the end of the day.

"There's encouragement for us so, no matter how flat the wicket is, if you have lateral movement that encourages you."

Chase and Hetmyer put on 56 for the fifth wicket but it was when Anderson struck again with the second new ball, Chase caught at slip by England captain Joe Root for 54, that the floodgates were opened.

He quickly added the scalps of wicketkeeper-batsman Shane Dowrich and Holder before Ben Stokes dismissed Kemar Roach to what proved the final ball of the day, Root taking his third catch of the innings at slip.

It was Stokes' third wicket of the innings after he removed obdurate opener Kraigg Brathwaite (40) and the experienced Darren Bravo, playing his first Test for more than two years, within a matter of minutes during an afternoon session shortened by a light shower.

Windies may well have been dismissed before the end of the day had Jos Buttler not missed a simple catch at extra-cover offered by Hetmyer off Anderson when the batsman was on only three.

He resumes on the second morning on 56 carrying the hopes of the West Indies to take their total closer to the 300-run mark.

Debutant opener John Campbell had impressed at the start of the day with a stroke-filled innings of 44 off 53 balls with eight fours before becoming the only wicket to fall in the morning.

England dropped a selectorial bombshell before the start of play in omitting Broad, a veteran of 134 Tests with 433 wickets to his name, in preference for a second specialist spinner in Adil Rashid, given the expectation of greater assistance for the slow bowlers than had been initially expected in the lead-in to the match.

Sam Curran shared the new ball with Anderson but neither could effect the breakthrough with Campbell starting brightly in taking two boundaries to third man in the first over he faced from Curran.

However his aggressive intent eventually got the better of him when Moeen Ali came into the attack.

Clearly intent on beating the off-spinner off his line, Campbell swept two boundaries immediately but fell palpably leg-before in Ali's second over when the left-hander missed another attempted sweep to end an opening partnership of 53.

Notwithstanding that success, both Ali and Rashid proved expensive, conceding a combined 115 runs off 29 overs and prompting Root to utilise himself for five overs of part-time off-spin.

England Cricket Team West Indies vs England, 1st Test Cricket
Get the latest updates on IPL 2020, check out the IPL Schedule for 2020 and Indian Premier League (IPL) Cricket live score . Like us on Facebook or follow us on Twitter for more sports updates. You can also download the NDTV Cricket app for Android or iOS.