Will Smeed Takes PSL 2022 By Storm. Watch His Humongous Six vs Peshawar Zalmi

Young Englishman Will Smeed made his PSL bow on Friday and immediately hitting the ground running with a breathtaking knock of 97 runs off 62 balls. 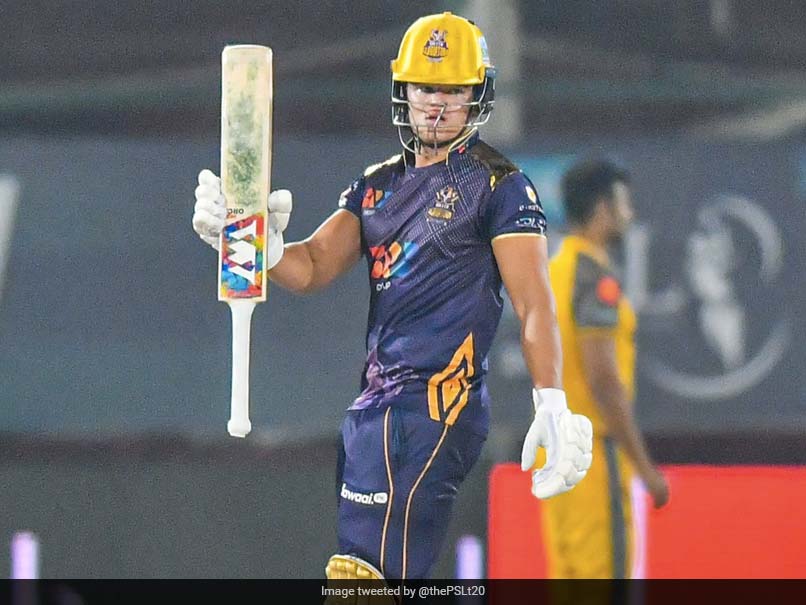 Young Englishman Will Smeed made his Pakistan Super League (PSL) bow on Friday and immediately hitting the ground running with a breathtaking knock of 97 runs off 62 balls. The 20-year-old's brutal hitting took PSL 2022 by storm but it wasn't enough to get his team Quetta Gladiators over the line as Peshawar Zalmi won the match by five wickets with two balls remaining. However, Smeed grabbed all the headlines for his stunning power hitting that included a massive six which sailed out of the stadium.

Smeed along with his opening partner Ahsan Ali, who scored 73 off 46 balls, gave Quetta Gladiators the perfect platform to post a big total. The duo added 155 runs in just 15.3 overs for the opening wicket.

However, the rest of the batters failed to cash in. Smeed had a chance to reach his century but was caught on 97 off the last ball of the innings.

The Gladiators managed to reach 190 for four in their 20 overs.

In reply, Yasir Khan and Tom Kohler-Cadmore gave the Zalmis a whirlwind start.

Hussain Talat scored a fine 52 off 29 balls to play a crucial role while veteran Shoaib Malik anchored the innings with an unbeaten 48 off 32 balls as Peshawar Zalmi reached the target with two balls to spare.

All Quetta bowlers except Naseem Shah had an economy rate of over 9 in what was a poor bowling performance that saw Smeed's heroics with the bat go in vain.

Will Smeed and Quetta Gladiators' next match is against Multan Sultans and the team will be hoping for more of the same from the young English batter.