Kyle Mayers and Shamarh Brooks both scored maiden one-day international centuries as West Indies completed a 3-0 sweep of their series against the Netherlands on Saturday, winning the final match in Amstelveen by 20 runs 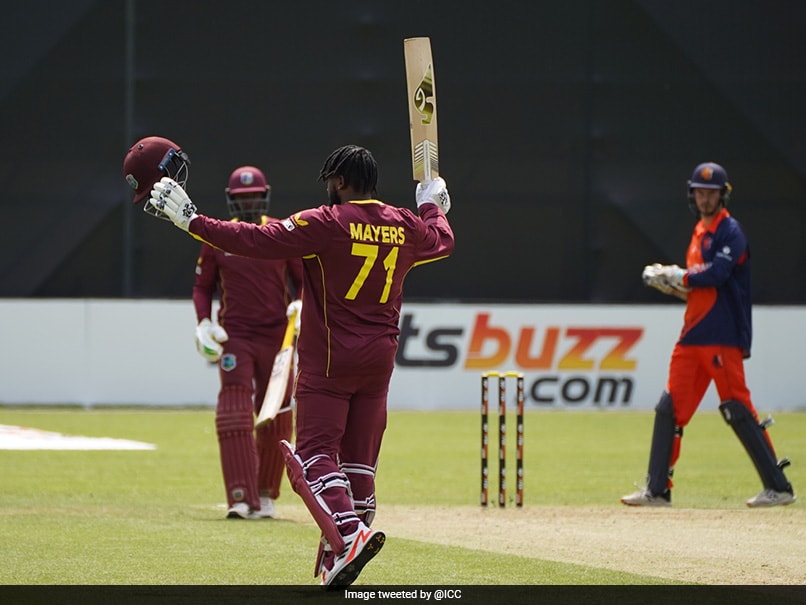 Kyle Mayers and Shamarh Brooks both scored maiden one-day international centuries as West Indies completed a 3-0 sweep of their series against the Netherlands on Saturday, winning the final match in Amstelveen by 20 runs. Mayers (120) and Brooks (101 not out) added 184 for the second wicket as West Indies reached 308 for five in their 50 overs. The Dutch batsmen battled hard with half-centuries for openers Max O'Dowd (89) and Vikramjit Singh (54) but could not maintain the chase, falling 20 runs short.

The series formed part of the World Cup Super League from which the top eight will qualify automatically for the next World Cup.

West Indies lie fourth behind Bangladesh, England and Afghanistan while the Netherlands remain down in 13th.

The West Indies openers made sure to cash in after winning the toss and choosing to bat first.

Shai Hope, who hit a century to guide the West Indies to victory in Tuesday's opener, played watchfully for his 24 off 43 balls which only ended when he mistimed a slog off Bas de Leede and spooned a catch to Vivian Kingma at mid-off.

Mayers, though, was going well at the other end and when Brooks joined him, the pair made hay, adding 184 for the second wicket in 29 overs.

Mayers was in particularly destructive form, hammering seven sixes and eight fours on his way to 120 from 106 balls.

When he picked out de Leede on the midwicket boundary in the 41st over, the innings changed down a couple of gears.

Brooks, who had been moving along smoothly, could add just another 18 runs from the 19 further balls he faced.

At the other end Nicholas Pooran, Brandon King and Akeal Hosein all fell cheaply as the Dutch bowlers stuck to their guns.

Brooks, however, steered West Indies past the 300 mark and the 33-year-old from Barbados reached his first ODI century in the final over of the innings.

The Dutch responded well with another good start from their openers Singh and O'Dowd who added 98 for the first wicket.

That left too much for the lower order to do in the closing overs.

The West Indies travel from Amsterdam to Pakistan for another three-match ODI series in Multan.

The Dutch face further Super League games against England and Pakistan, at home, in June and August respectively.

Netherlands Shamarh Brooks Kyle Mayers Vikramjit Singh Max O'Dowd Cricket VRA Ground, Amstelveen Netherlands vs West Indies, 3rd ODI
Get the latest updates on IPL Auction 2023 and check out  IPL 2023 and Live Cricket Score. Like us on Facebook or follow us on Twitter for more sports updates. You can also download the NDTV Cricket app for Android or iOS.