Harmanpreet Kaur failed to fire with the bat but made her mark in the field by taking an absolutely sensational catch. 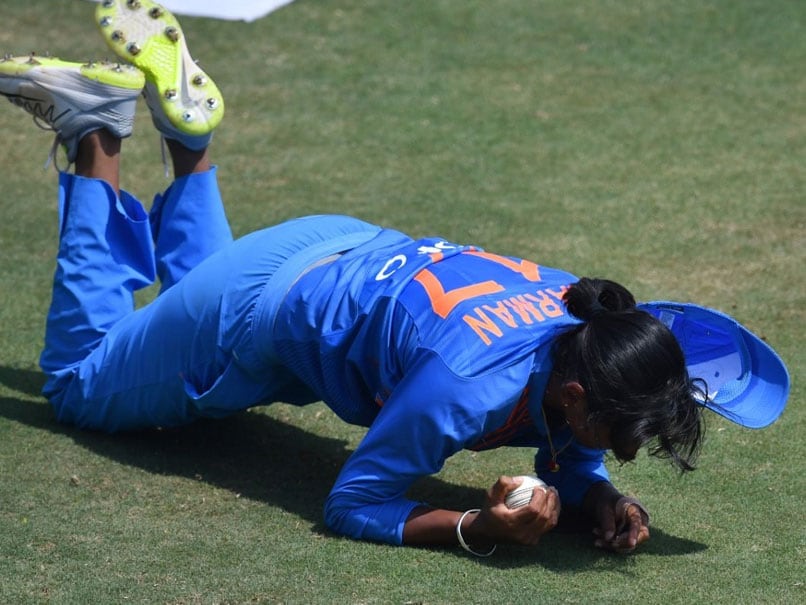 The Indian women's cricket team went down by the narrowest of margins against the West Indies in the opening ODI of the three-match series at the Sir Vivian Richards Stadium, North Sound, in Antigua. However, there were quite a few positives for India women. Priya Punia top-scored for India with a fine knock of 75 while Jemimah Rodrigues also showcased her talent with a 67-ball 41. And while Harmanpreet Kaur failed to fire with the bat, she made her mark in the match in the field by taking an absolutely sensational one-handed catch at long-on.

Harmanpreet Kaur's catch became the talk of the town on social media and soon enough the video went viral on Twitter.

West Indies skipper Stafanie Taylor looked primed to reach her hundred with a six as she smashed Ekta Bisht down the ground. But from nowhere the figure of Harmanpreet Kaur appeared as she leaped in the air and caught the ball with her left hand to complete an exceptional catch.

West Indies ended up with 225 for seven and it later proved to be enough as India were bowled out for 224 for seven in 50 overs, losing the match by just the one run.

Priya Punia scored a fine 75 off 107 balls as India piled the pressure on the hosts early on in the chase. Punia and Rodrigues notched a 78-run partnership for the first wicket while Punam Raut (22) and Mithali Raj (20) also made small contributions to put India on top.

At 170 for two in 39.2 overs, India looked on track to chase down the target, but Anisa Mohammed had other ideas.

The spinner turned the match on its head by taking five wickets, which included the likes of Priya Punia and Mithali Raj.

India needed nine off the last over with two wickets in hand, but Anisa Mohammed took both wickets, including one off the last ball, to give the hosts a one-run win in the series opener.

West Indies Women Harmanpreet Kaur Stafanie Taylor Mithali Raj Cricket
Get the latest updates on ICC T20 Worldcup 2022 and CWG 2022 check out the Schedule, Live Score and Medals Tally. Like us on Facebook or follow us on Twitter for more sports updates. You can also download the NDTV Cricket app for Android or iOS.