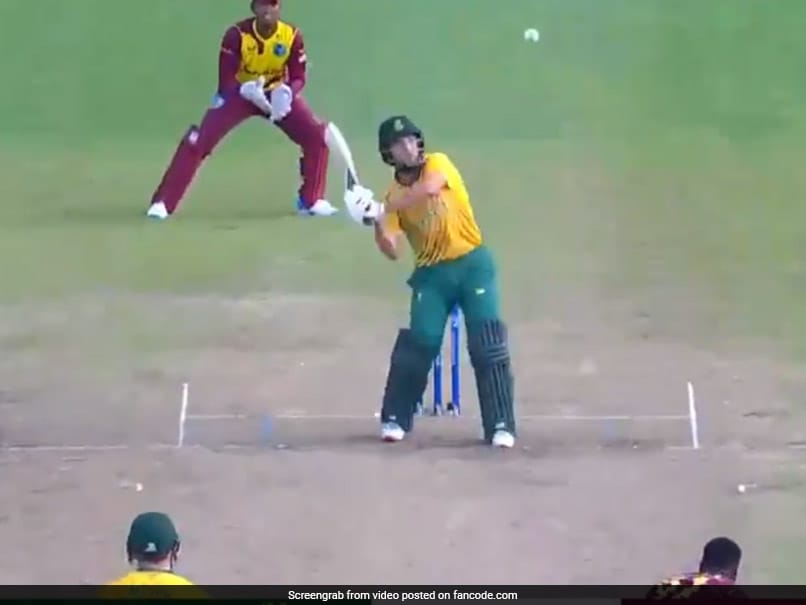 Umpires gave a shocking decision in the 19th over.© Fancode

South Africa greats AB de Villiers and Dale Steyn reacted to an on-field umpire's decision as a short-pitched delivery that finished well outside the leg stump of SA batsman Wiaan Mulder was not ruled a wide in the final T20I between West Indies and South Africa. It happened when South Africa's score read 160-4 and Mulder was on strike against Obed McCoy on the last ball of the 19th over. McCoy bowled a short ball with the line outside leg stump even as Mulder tried to get some bat on it. While Mulder may have expected that to be called a wide, the umpire didn't think so.

Former South Africa batsman AB de Villiers called it a "Shocker" as he replied to Dale Steyn's tweet which read, "How on earth is that not a wide???!!!!."

This decision notwithstanding the South African team registered a 25-run victory in the fifth and final T20I. The win helped them clinch the series 3-2 as well.

Batting first, South Africa scored 168 for 4 in their allotted 20 overs.

In reply, West Indies could only manage 143 for 9 in 20 overs. Evin Lewis made a gritty half-century while Shimron Hetmyer contributed 33 runs.

Quinton de Kock Cricket
Get the latest updates on ICC T20 Worldcup 2022 and CWG 2022 check out the Schedule, Live Score and Medals Tally. Like us on Facebook or follow us on Twitter for more sports updates. You can also download the NDTV Cricket app for Android or iOS.