Watch: Umpire's Shocking Decision To Give Batter Out In County Match Goes Viral

County Championship: Kent batter Jordan Cox was left stunned after he was given out by the on-field umpire during the match against Hampshire. 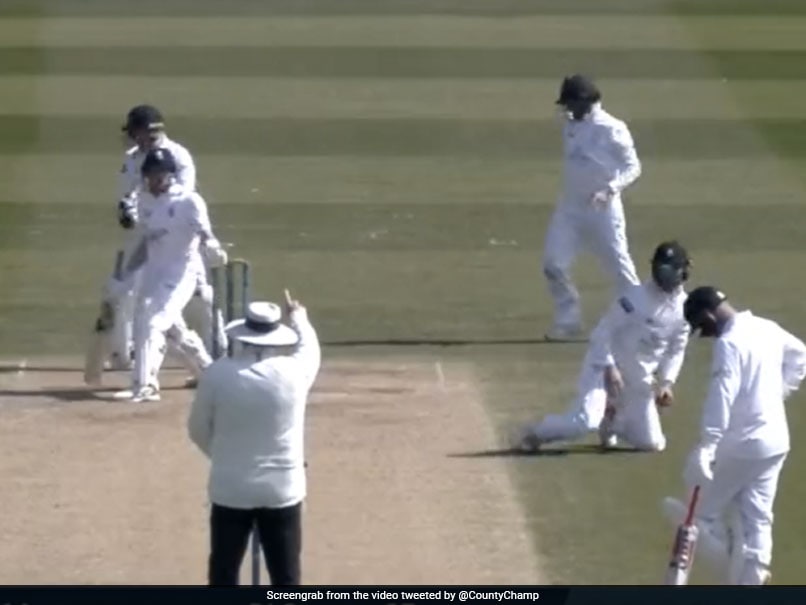 County Championship: The batter stood there is disbelief as the umpire raised his finger.© Twitter

Kent batter Jordon Cox was left stunned after he was given out by the on-field umpire in the County Championship Division One fixture against Hampshire on Sunday. Cox was adjudged out after the umpire thought the batter edged the ball to short leg. However, once one sees the replay, it clearly shows that the batter planted his foot across off-stump and the bat was tucked behind. The umpire raised his finger and Cox stood there in disbelief.

Cox was seemed to be trying to pad the delivery away that was bowled outside off by Felix Organ.

The video of the dismissal also prompted reactions from Ben Stokes, Liam Livingstone on Twitter.

"We've already offered our umpires to help out the IPL but looks like the County Championship is even more dire need. A truly terrible lbw decision," tweeted the official handle of Iceland Cricket.

We've already offered our umpires to help out the IPL but looks like the County Championship is even more dire need. A truly terrible lbw decision. https://t.co/0kIwwaN3NK

England batter Livingstone used laughing emojis after seeing the video of the dismissal on Twitter.

The dismissal of Cox came in Kent's second innings where the Oliver Robinson-led side was following on. Cox scored 64 runs before he was adjudged out by the on-field umpire. Joe Weatherley was the fielder at short leg when Cox was given out.

In the end, Hampshire defeated Kent by an innings and 51 runs at St Lawrence Ground in Canterbury.

England Cricket Team Cricket Jordan Cox
Get the latest updates on IPL Auction 2023 and check out  IPL 2023 and Live Cricket Score. Like us on Facebook or follow us on Twitter for more sports updates. You can also download the NDTV Cricket app for Android or iOS.