Watch: Commentators Absolutely Lose It After Comedy Of Errors From Fielding Team In European Cricket Series

The batters sneaked in three runs with the ball barely leaving the pitch area in comical scenes during a recent European League Series (ECS) match in Czech Republic. 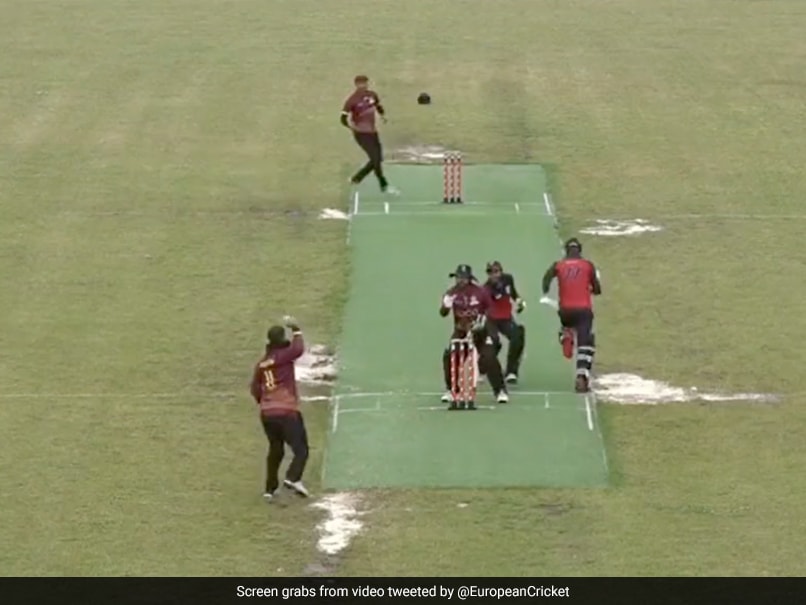 The commentators couldn't control their laughter as they saw the funny side to the incident.© Twitter

From run-out to overthrows, the eagerness to steal a quick run can bring in all sorts of possibilities into play in the world of cricket. But there are times when trying to take a single might lead to some bizarre instances. A similar incident took place during a recent European League Series (ECS) match in Czech Republic. In a video shared by ECS on their official Twitter handle, the Vinohardy CC players can be seen making a series of howlers in the outfield, which allowed the Prague Barbarians batters -- Jahanur Hoque and Andrew Sims -- to steal three runs.

Vinohardy players had three chances to effect a run out, but made in absolute mess of things in one of the funniest cricketing videos ever seen.

"They sneaked in 3 runs out of nowhere," the European Cricket Network captioned the video on Twitter.

While all the action was happening in the middle, the commentators couldn't control their laughter as they saw the funny side to the incident.

Interestingly, the match was reduced to three overs per side.

After being put into bat, Prague Barbarians scored a total of 24 runs for the loss the of two wickets.

Hoque was the top-scorer with 12 runs.

In reply, Vinohardy were restricted to 18 for three.

As things stand in Group B, Barbarians are third in the table with 8 points, while Vinohardy are behind them on fourth with 6 points.

Czech Republic
Get the latest updates on Fifa Worldcup 2022 and check out  Fifa World Cup Schedule, Stats and Live Cricket Score. Like us on Facebook or follow us on Twitter for more sports updates. You can also download the NDTV Cricket app for Android or iOS.