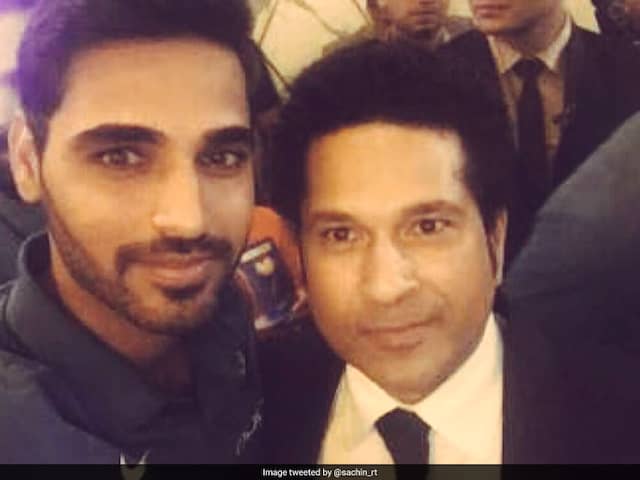 Star India pacer Bhuvneshwar Kumar, in the latest episode of Breakfast With Champions, recalled his first memories of witnessing cricket legend Sachin Tendulkar up and close off the field and admitted he was left blank. "I came out of the room and there was a noise of someone locking the door when I turned back it was Sachin Tendulkar.... Then I went with him inside the lift, kept staring at him, was left blank, he wished me luck before the match," the 28-year-old told host Gaurav Kapur.

Later, in the same first-class match the 28-year-old dismissed Tendulkar for a duck, which became the maiden occasion when the batting great was dismissed for zero in domestic cricket.

The Uttar Pradesh pacer, who has scalped 63 wickets in Test cricket also credited fellow speedster Ishant Sharma for bringing out the best in him in the dressing room.

"Credit Ishant Sharma, when I came to the team, I did not use to speak to someone, had hesitation, was reserve type. If something important use to happen I used to tell him," Bhuvneshwar explained.

Bhuvneshwar, who averages 26.09 in Tests, will be in action for India during the upcoming England tour, which is slated to get underway from July 3 at Old Trafford. The Virat Kohli-led team will play five Tests, three One Day Internationals (ODIs) and three Twenty20 Internationals (T20Is) in the bi-lateral series that concludes on September 11, 2018.