India fell to a 2-3 ODI series loss to Australia despite having a 2-0 lead. 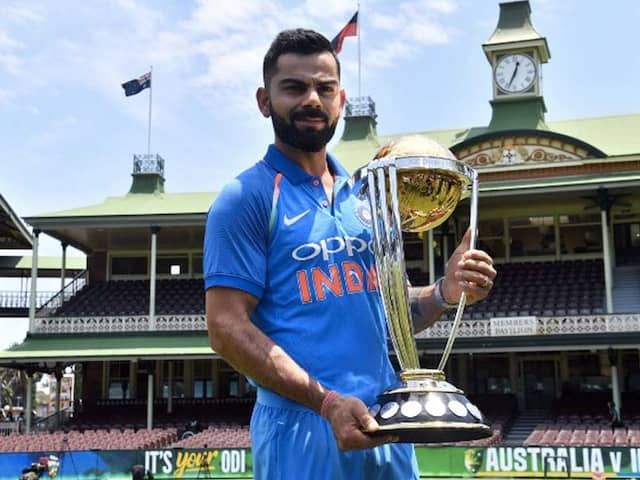 Virat Kohli's team will not play any ODIs before the World Cup warm up matches.© AFP

Virat Kohli has declared that the World Cup title race is wide open and no team can be labelled as clear favourites. With the quadrennial less than two months away, hosts England and heavyweights India are touted as the clear favourites but Kohli has rejected the notion. Kohli's Team India were beaten 3-2 at home by a depleted Australian side who claimed a 35-run victory in the fifth and final One-day International (ODI) in Delhi on Thursday to end their two-year series drought in the format. "Honestly, every team at the World Cup is a threat. Anyone who gets on a roll at a World Cup, it's very, very difficult to stop that team," Kohli said in a press conference.

"Having said that, any team who's on a roll can be knocked out in the semis... they can be defeated immediately by a side that's more brave on that particular day and wants it more and is more expressive as a side.

"I don't think any team starts the World Cup as favourites. Any team is dangerous. You see how the West Indies has come along. They are going to be a serious threat at the World Cup as well because of the balance that they've been able to crack.

"England has been a very strong side, Australia is now looking balanced, we are a strong side, New Zealand is good, Pakistan can defeat anyone on their day," Kohli added.

Australia claimed a stunning come-from-behind series win for a huge confidence boost ahead of the World Cup and with Steve Smith and David Warner soon to be back in the fold, the defending champions look solid on paper.

With the Indian Premier League set to get under way next week, Virat Kohli's team will not play any ODIs before the World Cup warm up matches.

India were riding high on confidence after series wins in Australia and New Zealand earlier this year but they have been handed a reality check in their last international assignment ahead of cricket's showpiece event to be hosted by England and Wales, starting May 30.

Virat Kohli Cricket World Cup 2019
Get the latest Cricket news, check out the India cricket schedule, Cricket live score . Like us on Facebook or follow us on Twitter for more sports updates. You can also download the NDTV Cricket app for Android or iOS.