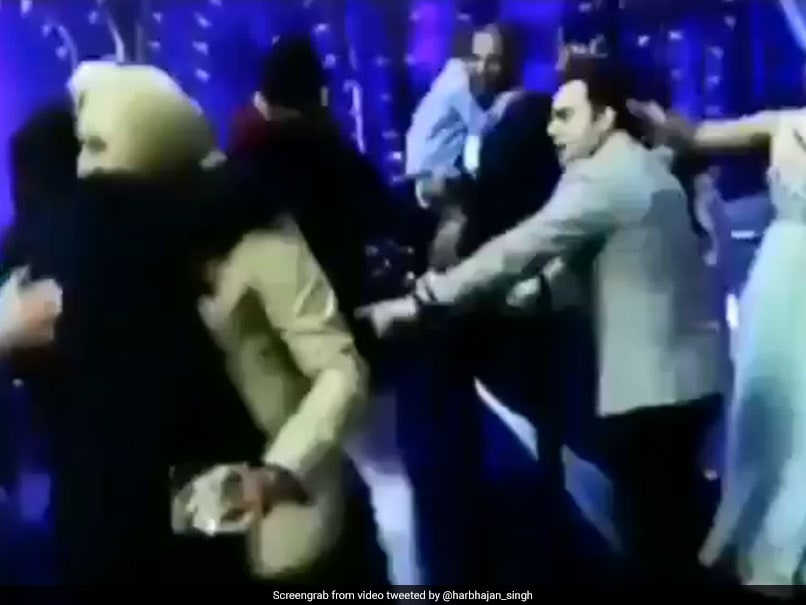 Virat Kohli and Anushka Sharma hosted a memorable wedding reception in Mumbai on December 26 which was attended by the rich and famous. While the pair have already reached South Africa for the Indian cricket team's gruelling 56-day long tour, moments from their glittering reception are still filtering into the public domain. Virushka's Mumbai reception was attended by some of the biggest names from the film and cricketing fraternity. While close friends and family were part of the Delhi reception, the couple's colleagues and contemporaries made it to the Mumbai event.

Among them was Harbhajan Singh, who on Friday took to Twitter to post a video of him and Shah Rukh Khan with Virat Kohli in the background setting the dance floor on fire.

Anushka was seen in side slick hair with cascading curls to go with the elegant vibe of her ensemble and wearing a Sabyasachi creation - a dull gold heavily embroidered and embellished lehenga set teamed with a matching dupatta, cinched at the waist with a signature Sabyasachi belt. She completed the heavy dress with simple earing studs, a diamond neck-piece and traditional Punjabi red bangles set.

Meanwhile, Virat wore a navy velvet bandhgala which he paired with a pair of white pants and brown shoes.

Comments
Topics mentioned in this article
India Cricket Team Harbhajan Singh Virat Kohli Cricket
Get the latest updates on India vs Australia Series, check out the India vs Australia Schedule for 2020-21 and Ind vs Aus live score . Like us on Facebook or follow us on Twitter for more sports updates. You can also download the NDTV Cricket app for Android or iOS.