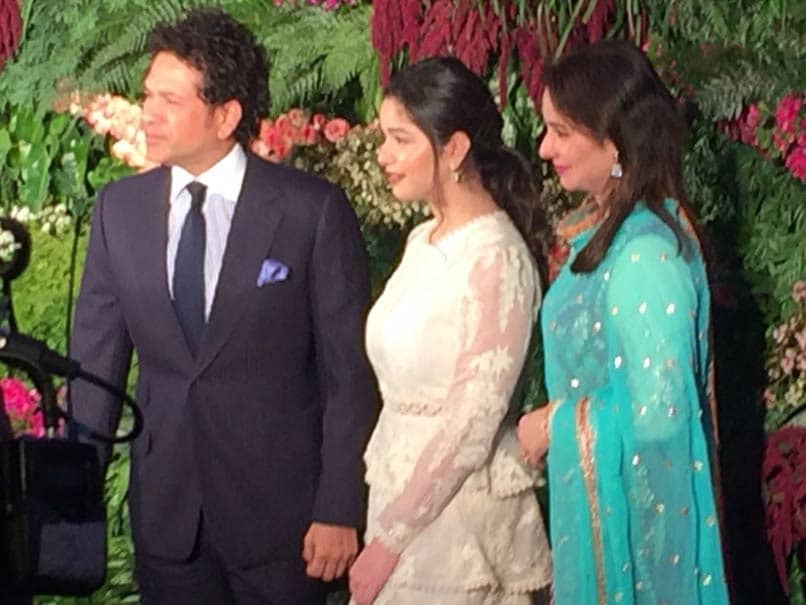 Former India captain and cricket legend Sachin Tendulkar was seen inVirat Kohli and Anuskha Sharma's wedding reception along with his wife Anjali Tendulkar and daughter Sara Tendulkar. Tendulkar was in a formal suit while Sara and Anjali were seen wearing traditional attire.The glitzy affair saw public personalities from many walks of life descend on the venue to celebrate the second leg of the high-profile couple's wedding reception. Virat and Anushka hosted their first reception, mainly attended by close friends and family, in New Delhi.

Several A-list celebrities, including cricketers and Bollywood stars attended high-profile couple's wedding reception. Before the team flies off to South Africa to play the 3 Test matches, 6 ODIs and 3 T20Is, Indian cricket team members came to wish the couples at the Mumbai venue. Kohli's mother Saroj Kohli, brother and other family members also posed for the shutterbugs at the reception ceremony in Mumbai.

Earlier, Indian cricket fans were left rather surprised after a photo surfaced on Twitter of Kumble along with several other celebrities at the St. Regis Hotel.

Photos of the Indian captain and the Bollywood actor were also doing the rounds on social media where the couple was seen arriving for the much-awaited Mumbai reception.

Anushka will accompany Virat to South Africa where the Indian captain will join the Indian squad and start preparing for the two-month long series against the Proteas, starting January 5.

The Bollywood actress is expected to spend New Year's Eve with Virat and return in the first week of January to begin next schedule of a film with Shah Rukh Khan in Mumbai.

Comments
Topics mentioned in this article
India Cricket Team Sachin Tendulkar Virat Kohli Cricket
Get the latest updates on IND vs NZ 2021, check out the Schedule and Live Score . Like us on Facebook or follow us on Twitter for more sports updates. You can also download the NDTV Cricket app for Android or iOS.