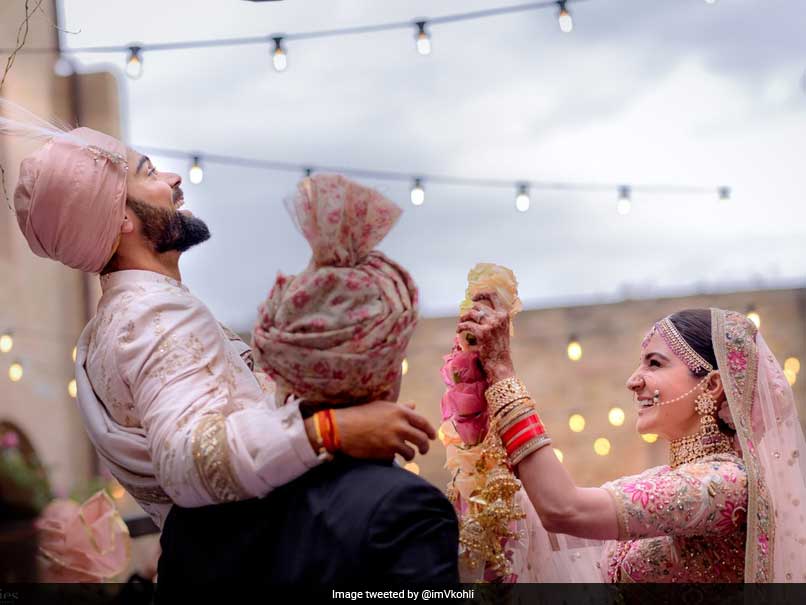 Virat Kohli and Anushka Sharma will have two receptions -- one in Delhi and the other one in Mumbai.© Twitter

Virat Kohli and Anushka Sharma's wedding on December 11 in Tuscany, Italy had the entire country hooked, especially with the rumour mills in a tizzy a few days before the announcement. However the announcement, which came on Virat and Anushka's Twitter handle put to rest a lot of speculation and conjecture. With the wedding festivities in Italy over, the focus now shifts to the two receptions that will be in New Delhi for relatives on December 21, followed by a celebration in Mumbai on December 26 to be attended by Bollywood stars and cricketers. Filmmaker Mahesh Bhatt tweeted a picture of the Mumbai reception invite, which had a special environment-friendly message.

Virat and Anushka's reception invite has plant sapling attached to it. Presumably, the star couple want their guests to plant a tree.

They made it ! Our heartiest congratulations to Anushka & Virat. We pray that this love story goes on forever and ever. Amen !@imVkohli @anushkasharma pic.twitter.com/dk9sqm4WgU

This is not the first time Virat and Anushka have indulged in some environmentally friendly activity.

During the Indian cricket team's tour to Sri Lanka, the duo were spotted planting and watering a sapling in Dambulla in August.

In 2015, Virat Kohli along with star wrestler Sushil Kumar and Minister of Environment, Forest and Climate Change Prakash Javadekar among others planted saplings at the Indira Paryavaran Bhawan on the occasion of World Environment Day.

Meanwhile, Anushka will be travelling to South Africa with Virat as India tour the country for a three-Test, six-ODI and three T20I series. Also, a spokesperson revealed that the newly-wed couple will be shifting to their "new residence in Worli in December".

The pair, dubbed "Virushka" by fans and media, is one of the highest profile couples in the country.