"Video Of The Day": Pat Cummins Bear-Hugged By Pregnant Partner After Exiting Quarantine In Sydney

Several Australian cricketers, including fast bowler Pat Cummins, ended their quarantine in Australia on Monday and united with their loved ones. 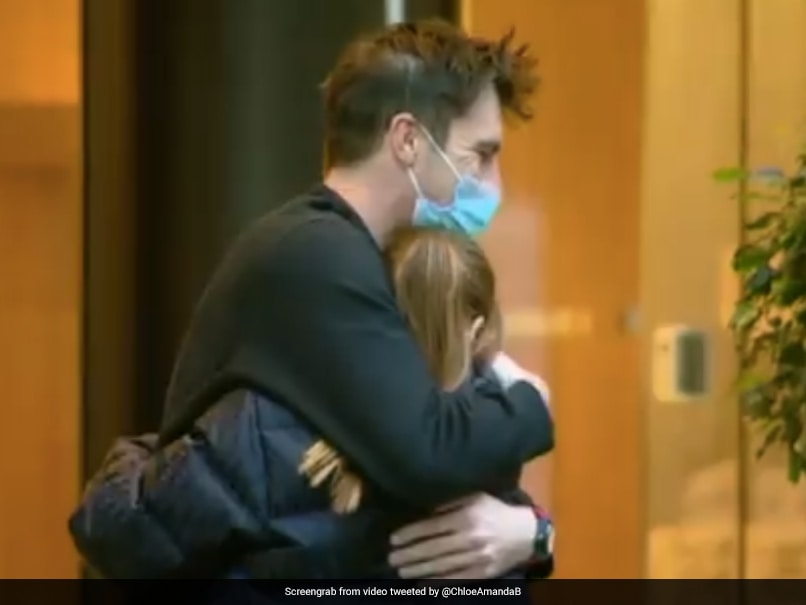 Pat Cummins reunited with his pregnant partner Becky after completing his quarantine in Sydney.© Twitter

Australian cricketers, including Pat Cummins, Steve Smith and David Warner, were finally reunited with their friends and families after completing a 14-day quarantine in Sydney. Australian players, coaches and staff, who had taken part in the Indian Premier League (IPL) 2021 season, had to spend 14 days in hotel rooms after returning on a charter flight from the Maldives. Cummins was seen reuniting with his pregnant partner Becky, who held him in a tight embrace after the cricketer exited the quarantine hotel.

The video of Cummins meeting his partner went viral on Twitter.

Video of the day! After eight weeks away for the IPL, Pat Cummins finally leaves hotel quarantine and reunites with his pregnant partner Becky. All the feels! pic.twitter.com/YA3j98zJId

In another video, posted on her Instagram stories by his wife Candice, David Warner was seen meeting his three daughters as he too got an emotional welcome from his family.

The Australian contingent left India and went to the Maldives after IPL 2021 was postponed following numerous COVID-19 cases among players and staff members across teams.

They spent about 10 days in the Maldives before the Australian government lifted a temporary ban on citizens who had been in India from travelling home.

Last week, the Board of Control for Cricket in India (BCCI) announced that the 2021 season of IPL will resume in the United Arab Emirates in September-October.

The Indian cricket board said the decision was taken considering the "monsoon season in India in the months of September-October this year".

Only 29 matches were held this season before the tournament came to a halt.

IPL 2020 was also held in the UAE with Mumbai Indians defeating Delhi Capitals in the final to clinch their fifth title.

David Warner IPL 2021 Cricket
Get the latest updates on India vs South Africa and check out  Schedule, Results and Live Score. Like us on Facebook or follow us on Twitter for more sports updates. You can also download the NDTV Cricket app for Android or iOS.