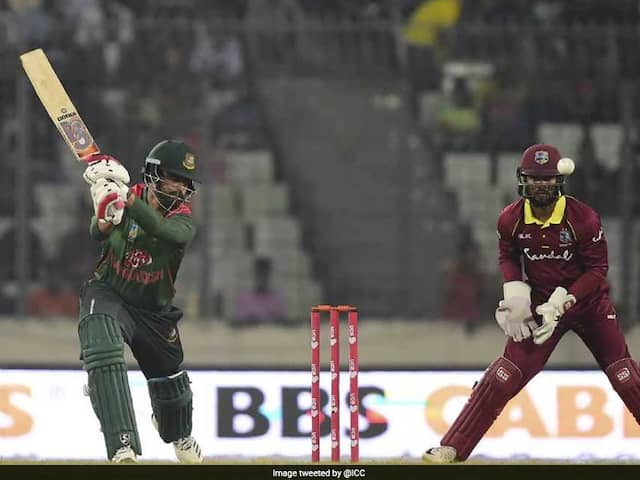 Tamim Iqbal and Soumya Sarkar slammed half-centuries as Bangladesh cruised to an eight-wicket win over the West Indies in the third and final one-day international to take the three-match series 2-1 on Friday. Tamim hit an unbeaten 81 in the northeastern city of Sylhet while Soumya added 80 off 81 balls to guide Bangladesh to 202-2 in 38.3 overs after Mehidy Hasan's career best 4-29 helped the home side restrict the West Indies to 198-8 in 50 overs. Shai Hope fought a lone battle for the tourists, scoring his second successive hundred of the series but it was in vain as no other batsman provided support.

Fresh from an unbeaten 146 off 144 balls in the previous match, Hope struck another unconquered knock of 108 off 131 to prop up the visitors, taking his tally in the series to 297 runs.

Bangladesh made a steady response, with Tamim and Liton Das hitting 45 runs for the opening wicket before Liton offered a catch to Rovman Powell at mid-on off Keemo Paul.

Soumya and Tamim denied the West Indies any momentum, putting 131 runs in their second wicket stand, which all but sealed the contest and the series.

Soumya was the aggressor-in-chief, smashing five sixes and as many fours before Paul sent his leg-stump cartwheeling.

Tamim, who happily anchored the innings, sealed the game with successive fours off Powell, his eighth and ninth boundary of the innings.

Mushfiqur Rahim was unbeaten on 16 at the other end.

"It was a good match -- Hope played an excellent innings," Mashrafe said after the match.

Earlier, Hope defied the spirited Bangladesh attack, hitting Shakib over the long off to bring up his fourth ODI century after the ninth wicket had fallen for 177 runs.

The opener, who was named player of the series, also hit 10 fours in his fine innings.

"Still a bit dizzy to be honest, but I've hung in there. Obviously wanted my team to get over the line, but very unfortunate for the guys to not take it till the end and hopefully we will learn from our mistakes," said Hope.

Bangladesh won the first match by five wickets on Sunday before the West Indies levelled the series with four-wicket win in the second match two days later.

The West Indies will wrap up their tour with three Twenty20 internationals, with the opening match scheduled at the same venue on Monday.

Soumya Sarkar Cricket
Get the latest Cricket news, check out the India cricket schedule, Cricket live score . Like us on Facebook or follow us on Twitter for more sports updates. You can also download the NDTV Cricket app for Android or iOS.