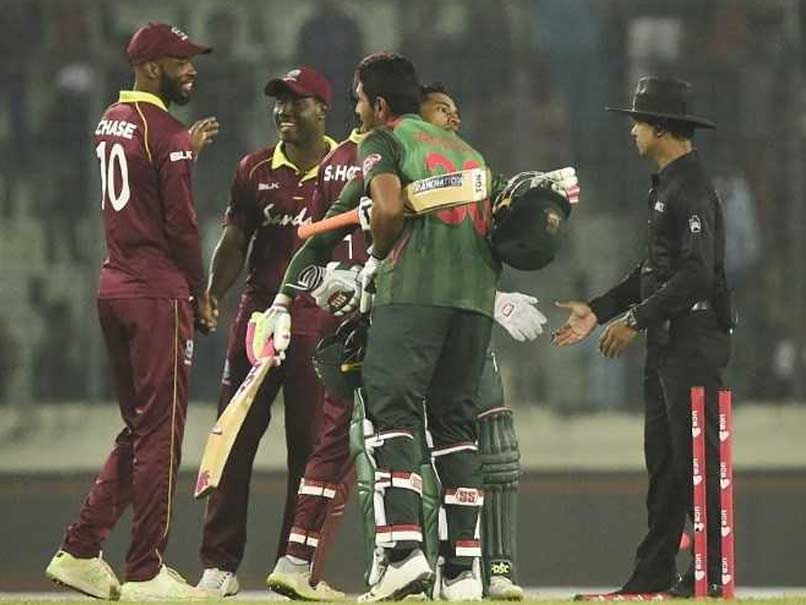 Bangaldesh beat the Windies by five wickets to take a 1-0 lead in three-match ODI series.© AFP

Mushfiqur Rahim top scored with an unbeaten 55 as Bangladesh defeated the Windies by five wickets in the first One-Day International (ODI)in Dhaka on Sunday. Set a modest target after three wickets each from Mashrafe Mortaza and Mustafizur Rahman helped Bangladesh restrict the Windies to 195-9, the hosts sailed to 196-5 in 35.1 overs for a comprehensive win to kick off the three-match series. Mushfiqur shared 57 runs with Shakib Al Hasan for the fourth wicket to steady Bangladesh's innings after the Windies had reduced the home side to 89-3 on a slow pitch at the Sher-e-Bangla National Stadium.

Rovman Powell dismissed Shakib for 30 to break the stand but Soumya Sarkar killed off the visitors' hopes with a brief cameo of 19 from 13 balls, which included two fours and a six.

Mushfiqur, who hit five boundaries in his patient knock, pushed Roston Chase for a single to complete his 31st fifty in ODIs before an outside edge to leg spinner Devendra flew to third man for two runs to wrap up the victory.

Earlier, opener Liton Das scored 41 off 57 balls with five fours for the home side, but not before he was reprieved on five off a no-ball by Kemar Roach.

The Windies owed their total to 43 off 59 balls by opener Shai Hope and contributions from lower-order batsmen Roston Chase and Keemo Paul, who made 32 and 36 runs respectively.

The visitors, who opted to bat first, had been restricted to 127-6 after 40 overs despite Hope's effort, but Chase and Paul put on 51 runs for the seventh wicket to give their bowlers something to fight for.

Paul hit two sixes and a four in his 28-ball innings before he was dismissed by Mustafizur in the final over.

Left-arm pacer Mustafizur finished with 3-35 after fellow fast bowler Mashrafe grabbed 3-30 playing his 200th ODI -- the first Bangladeshi to do so.

Mashrafe was named man of the match for his effort.

"The West Indies are very dangerous in this format but our bowlers were brilliant," Mashrafe said after the match.

Windies' Powell blamed his side's batting for their defeat.

"We just didn't bat as well as we wanted to and that brought about our downfall. The players who got starts on such a hard wicket should have carried on," he said.

The second match of the series will be held at the same venue on Tuesday.

Mashrafe Mortaza Mustafizur Rahman Bangladesh vs West Indies, 1st ODI Cricket
Get the latest updates on ICC Women's Cricket World Cup 2022 and IPL 2022, check out the Schedule , Live Score and IPL Points Table. Like us on Facebook or follow us on Twitter for more sports updates. You can also download the NDTV Cricket app for Android or iOS.