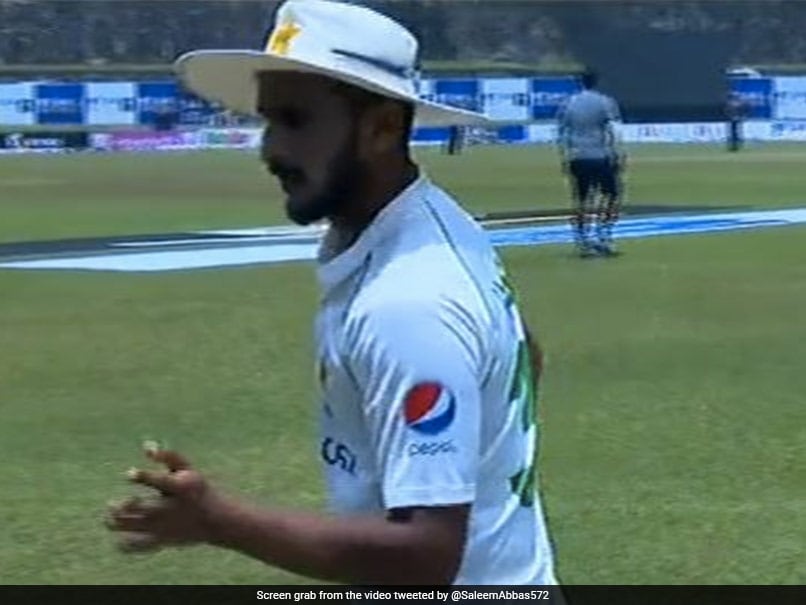 A video of Pakistan pacer Hassan Ali shaking a leg during the first Test match against Sri Lanka at the Galle International Cricket Stadium went viral on Saturday. Pakistan are in Sri Lanka to play two Tests, in Galle and Colombo, respectively. In the video, Hassan could be seen in the video dancing in a jovial manner while Haris Rauf watches him with a smile on his face. Even former New Zealand cricketer Danny Morrison, who is part of the broadcasting team, couldn't resist from commenting on Hasan's quirky moves.

"Hassan Ali .. well this is all part of a routine to get a little bit loose ... different these days.. these guys.. but nonetheless enjoying himself Hasan Ali," Morrison can be heard saying on air.

Hasan ended with figures of two for 23, helping Pakistan in restricting Sri Lanka to a first innings total of 222. However, it was Shaheen Afridi who stole the show on Day 1 in Galle.

The left-arm pacer took four for 58 which enabled the visitors to keep the hosts under the pump. In-form batter Dinesh Chandimal restored some parity for Sri Lanka with a well-crafted knock of 76 to force Sri Lanka past the 200-run mark.

Apart from Chandimal, Oshada Fernando and Maheesh Theekshana also played cameos of 35 and 38.

In reply, Pakistan were 24 for two at stumps with skipper Babar Azam and Azhar Ali unbeaten. Kasun Rajitha dismissed Imam-ul-Haq early into the Pakistan innings, while Prabath Jayasuriya scalped Abdullah Shafique ahead of the close of the day's play.

Hasan Ali Cricket
Get the latest updates on India vs South Africa and check out  Schedule, Results and Live Score. Like us on Facebook or follow us on Twitter for more sports updates. You can also download the NDTV Cricket app for Android or iOS.