SL vs AUS: Australia and Sri Lanka will square off in two Tests, beginning June 29. 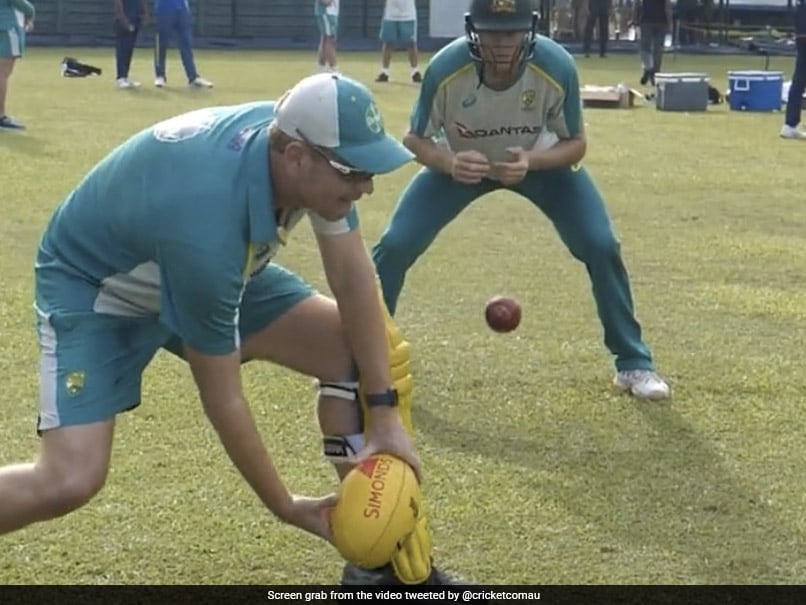 Australia cricket team has come up with a new drill to practice close-in catches.© Twitter

The Australian cricket team is currently in Sri Lanka for their multi-format series and currently both teams are squaring off in the five-match ODI series. The hosts have taken a 3-1 unassailable lead after beating Australia by 4 runs in the fourth ODI. However, the Pat Cummins-led side have already started preparing for the two-match Test series, beginning June 29 and the team have come up with a new drill to practice catching at positions close to the bat. In a video posted by cricket.com.au, head coach Andrew McDonald can be seen holding an AFL ball in his hand, and Nathan Lyon is delivering the cricket ball from the other end.

McDonald then crouches down to make contact with the cricket ball, to help Marnus Labuschagne and Travis Head practice close-in catching.

Coming to a net session near you soon: The Aussies have come up with an ingenious new training drill for the close-in fielders ahead of the #SLvAUS Tests pic.twitter.com/5lLKd39gjU

Talking about the new drill, spinner Nathan Lyon said: "So we had the AFL football out and we had Travis Head at silly mid-off and Marnus at bat-pad. Just trying to hone in on those skills because we understand how important these positions are. Little drill with me throwing the ball to Ronnie (Andre McDonald) with the football ball and it's just popping up a little bit. It's hard to practice bat-pads when you can kind of read the play but with the footy, we have found that we can get a little bit of variation in it."

"I think it's really good training drill to be honest with you. I have not seen it done like that before, that's something we'll be moving forward with I reckon, and I am more than happy to throw it, if it means that we are getting into really good positions for the bat-pads," he added.

Australia had defeated Pakistan in a three-match Test series 1-0 earlier this year and the Cummins-led side is currently at the top of the table in the World Test Championship standings.

On the other hand, Sri Lanka are in fourth place in the WTC standings, behind South Africa (second) and India (third).

Nathan Lyon Andrew McDonald Cricket
Get the latest updates on IPL Auction 2023 and check out  IPL 2023 and Live Cricket Score. Like us on Facebook or follow us on Twitter for more sports updates. You can also download the NDTV Cricket app for Android or iOS.