Watch: David Warner Has To Be Restrained In Fiery Altercation With Quinton de Kock

A footage has surfaced of an angry David Warner being restrained from a heated clash with Quinton de Kock on day four of the first Test between South Africa and Australia. 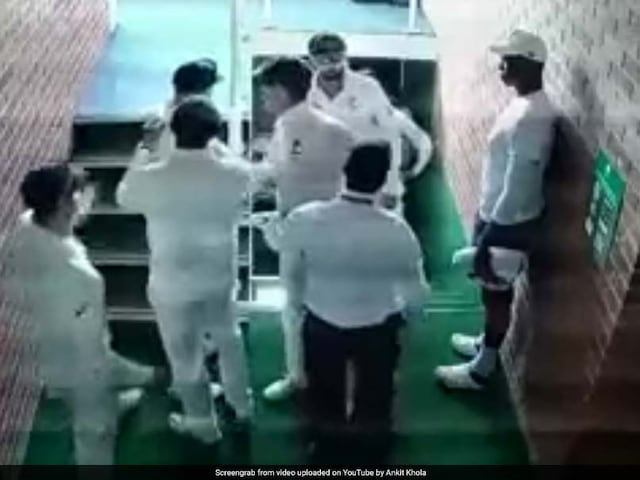 In an explosive CCTV footage that has emerged, multiple Australian players had to restrain opener David Warner, who is seen having a heated exchange with South African wicketkeeper batsman Quinton de Kock at tea on day four of the first Test. According to reports in the Australian media, the altercation took place following exuberant Australian celebrations after the run-out of AB de Villiers. Emotions seemed to have boiled over as the players made their way to their respective dressing rooms with Warner seen launching a fiery tirade at De Kock.

In the footage players from both teams can be seen walking up the stairs and making their way to their respective dressing rooms. As they are climbing up the stairs, it's noticeable that something is afoot with players stopping and having a look behind them.

Suddenly Warner emerges, being pushed back by Usman Khawaja. The latter tries to take Warner into the dressing room but the Australian vice-captain was having none of it and tries to confront De Kock who is just behind a few Australian players.

Finally, Warner is taken away from the scene by captain Steve Smith.

"CA is aware of reports of an incident between players in Durban. CA is working to establish the facts of what has occurred and will not be commenting further until that has been done," a Cricket Australia spokesperson was quoted as saying by cricket.com.au.

Aiden Markram led a stirring South African fightback but could not prevent Australia from closing in on victory on the fourth day of the first Test at Kingsmead on Sunday. Opening batsman Markram made 143 but South Africa were hanging on at 293 for nine, still 124 runs short of a target of 417, when bad light stopped play.