Pakistan beat India by 180 runs in the Champions Trophy final. 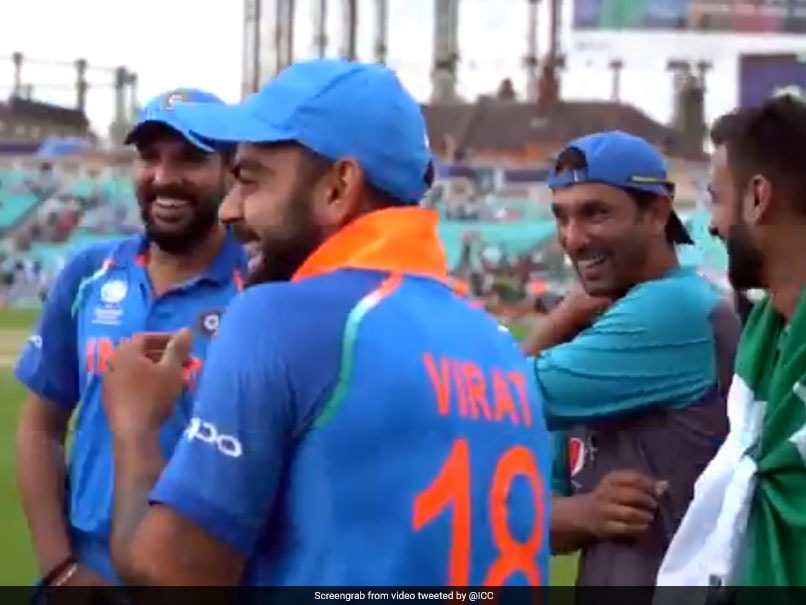 Pakistan cricketers Shoaib Malik and Saeed Ajmal have both played a crucial part for their country over the years. However, one incident that stands out in their playing careers is the mix-up between them before taking a catch. The dropped catch drew comical reactions across social media. Indian captain Virat Kohli and cricketer Yuvraj Singh were also amused by that particular incident. Speaking on the Voice of Cricket show, Shoaib Malik recalled the moment when Virat Kohli and Yuvraj Singh, at the 2017 Champions Trophy final presentation ceremony, asked him about the catch drop incident. "We were playing the Champions Trophy final against India. Post the final, in the prize distribution, Yuvraj Singh, Virat Kohli, Azhar (bowling coach Azhar Mahmood) and myself were laughing. We all were discussing the same catch and laughing", he said.

In the latest episode of Voice of Cricket @realshoaibmalik joins @ZAbbasOfficial and narrates what Saeed Ajmal said after the dropped catch, his last wish before retirement, what Sialkot Stallions means to him and much more!
Watch the full episode on YT: https://t.co/VEDTaULMm0 pic.twitter.com/dtB5DIxQEW

Virat Kohli has asked him what Saeed Ajmal told him after the floored catch, to which Shoaib Malik replied, "That catch was Chris Gayle's. I asked Ajmal 'if you had positioned yourself to take the catch, why did you pull out at the last moment'? He told me that he waited crouched on the ground to take the catch just in case you (Shoaib Malik) drop it."

India were outclassed by Pakistan in the Champions Trophy by 180 runs. Batting first, Pakistan had scored 338/4 in their 50 overs courtesy Fakhar Zaman (114), Mohammad Hafeez (57*) and Azhar Ali (59) knocks.

Barring Hardik Pandya (76), the Indian batsmen faltered in the run-chase after a stupendous bowling show by Pakistan pacers Mohammad Amir (3/16) and Hasan Ali (3/19). India were eventually bundled out for 158 runs in 30.3 overs.

Saeed Ajmal Shoaib Malik Cricket
Get the latest updates on ICC Women's Cricket World Cup 2022 and IPL 2022, check out the Schedule , Live Score and IPL Points Table. Like us on Facebook or follow us on Twitter for more sports updates. You can also download the NDTV Cricket app for Android or iOS.