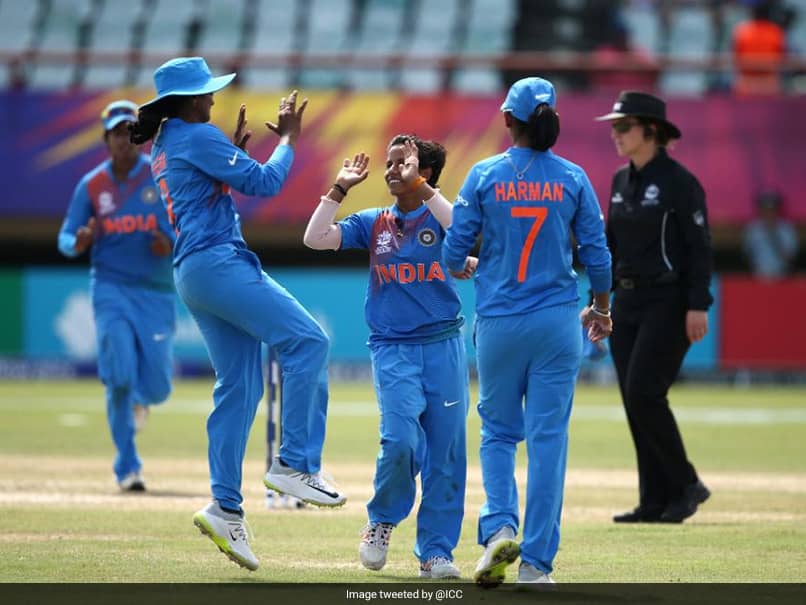 Shafali Verma struck a fine 46 before Poonam Yadav claimed three wickets as India registered a convincing 51-run win over South Africa in the rain-hit fourth women's T20I to take an unassailable 2-0 lead in the five-match series in Surat on Tuesday. The 15-year-old Shafali, who was dismissed for a four-ball duck on her debut in the opening match, laid the foundation for a good total with a 33-ball innings, while Jemimah Rodrigues (33) provided the stability, scoring a 22-ball 33. Skipper Harmanpreet Kaur (16) and Deepti Sharma (20 not out) also came up with useful contributions as India women posted a competitive 140 for four in a match which was reduced to 17 overs due to rain.

Laura Wolvaardt (23) then added 39 runs with Tazmin Brits (20) before the former was dismissed by left-arm spinner Radha Yadav (2/16) in the 8th over.

Poonam Yadav (3/13) then weaved her magic, striking twice in two balls to leave South Africa at 65 for four in 10.5 overs.

The 28-year-old leg-spinner first dismissed Nadine de Klerk (9), who tried to go aerial only to find Shafali Verma at covers, and then removed M du Preez (0), who was caught at long-on by Veda Krishnamurthy.

Skipper Sune Luus then became the third victim of Poonam. She was stumped by Taniya Bhatia as South Africa looked down the barrel at 72 for 5 in 12.5 overs.

Brits was then cleaned up by Deepti Sharma (/19) as the visitors slumped to 74-6.

Lara Goodall (8) and Ayabonga Khaka (1) then tried their hands in vain. Earlier, Shafali, playing only the second T20I of her career, blasted a 33-ball 46 studded with five hits to the fence and two sixes to give India a flying start after the hosts were asked to take first strike.

Shafali and Smriti Mandhana (13) added 52 runs off 42 balls for the opening wicket before seamer Nadine de Klerk (2/24) produced the first breakthrough in the 7th over. de Klerk had Mandhana caught at point by Du Preez.

Shafali was then cleaned up by Tumi Sekhukhune (1/22) when she was trying to go for a big shot over cover only to see the ball get a thick inside edge and disturb the stumps.

Harmanpreet and Rodrigues added 24 runs before the skipper holed out to long-on in the 11th over off de Klerk as India women slipped to 89 for three.

Rodrigues and Deepti then took India across the 100-mark. The duo shared a 40-mark partnership before Rodrigues was bowled by Khaka (1/33) in the 16th over.

India had won the opening game by 11 runs. The second and third T20I were washed out. India will now take on South Africa women in the fifth T20I on Friday.

South Africa Women Poonam Yadav Harmanpreet Kaur Mignon du Preez Cricket
Get the latest updates on IPL 2020, check out the IPL Schedule for 2020 and Indian Premier League (IPL) Cricket live score . Like us on Facebook or follow us on Twitter for more sports updates. You can also download the NDTV Cricket app for Android or iOS.