India women: Harmanpreet Kaur heaped praise on bowlers, led by Deepti Sharma, as they defended a modest total of 130 runs to win the first T20I in Surat. 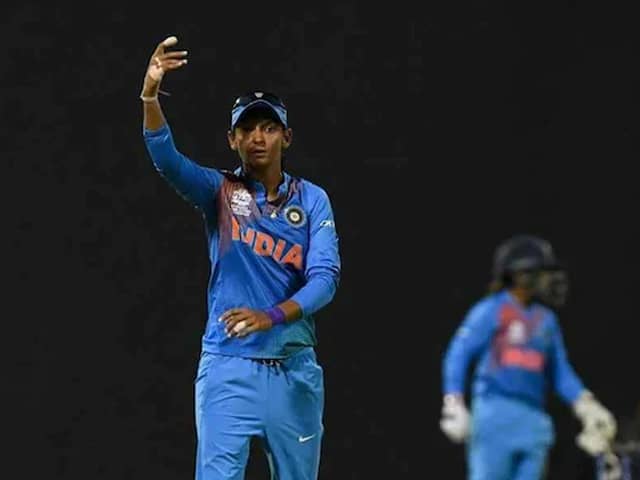 India women: Harmanpreet Kaur said she was nervous at the half-time because of the total.© AFP

Indian women's cricket team captain Harmanpreet Kaur said the team's below-par batting show in the first T20 International against South Africa in Surat had left her nervous before the bowlers rose to the challenge with a stellar effort. Harmanpreet was the only Indian batswoman to play an impactful knock, scoring 43, while the rest of her colleagues failed to chip in with any notable contribution. India posted 130 after being put in to bat on Tuesday. The bowlers, led by player of the match Deepti Sharma(3/8), produced an impressive show to dismiss South Africa for 119 in 19.5 overs.

"I was nervous at the halfway stage but we knew that we'd have something for the bowlers. They did a great job," Harmanpreet said after the match.

She said the players have been working hard on their fitness.

"We were doing a lot of fitness (regimens) before coming here and we got the result on the field. The way we fielded and bowled, I was happy," she said.

She also said her side still needs improvement in several areas, especially batting.

"Lot of areas to improve. Need to improve a lot with the bat. We are playing with an extra batter, so if batters do well, we can do even better," said the 30-year-old.

She said she had trusted Radha Yadav to do well in the final over of the South African run chase and eventually the left-armer took two wickets to end the visiting side's innings.

Star of the match Deepti said her effort was the "best bowling performance" of her career.

"We bowled how I had planned. Got help from the wicket too. The plan was to bowl wicket to wicket and it was turning, so I pitched it up too," she said.

"The mindset was to bowl in front. We were confident at the halfway mark. And we wanted to enjoy. If you enjoy, you automatically do well," the 22-year-old off-spinner said.

South Africa captain Sune Luus said 130 was a chaseable total though her side could not make it in the end.

"The way our new-ball bowlers bowled, they gave us a good platform to work on. We thought 130 was a total we could chase. Chasing 130 is about when you go for the charge," she said.

"Lizelle Lee gave a good platform. The batsmen who then came in just couldn't execute. The way Deepti and the spinners bowled, you could definitely see there was more spin as the evening progressed."

The second T20I between the two sides will be played on Thursday at the same venue in Surat.

South Africa Women Harmanpreet Kaur Deepti Sharma Sune Luus Cricket
Get the latest Cricket news, check out the India cricket schedule, Cricket live score . Like us on Facebook or follow us on Twitter for more sports updates. You can also download the NDTV Cricket app for Android or iOS.