Indian all-rounder Ravindra Jadeja left a comment on teammate Yuzvendra Chahal's pic on Instagram, calling Chahal the "hottest guy alive". Chahal posted a pic, clicked by his wife Dhanashree Verma, on Instagram and captioned it as "do what feels good". Fans flooded the pic with comments even as it garnered more than 400,000 likes. Chahal is set to be in action for Royal Challengers Bangalore (RCB) when the Indian Premier League (IPL) 2021 resumes in the UAE from September 19. 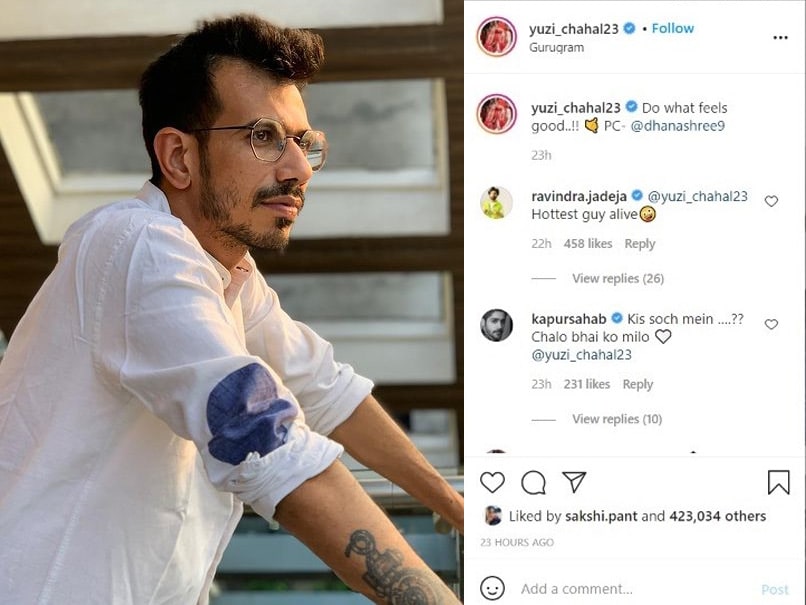 Chahal has been at the top of his social media game, as ever, posting pictures with wife Dhanashree and sharing stories featuring Dhanashree and their pet dogs.

The leg spinner was last seen in action during India's limited-overs tour of Sri Lanka in July. India won the ODI series 2-1 on that tour but lost the T20I series 1-2.

Chahal, one of the senior players at RCB, will look to add to his four wickets from seven games thus far in the season when the IPL resumes.

The tournament was postponed in May this year after several Covid positive cases across teams inside the tournament's bio-bubble.

The remainder of the tournament was moved from India to the UAE and is slotted to finish on October 15, two days before the T20 World Cup, also scheduled to be played in the UAE and Oman, begins on October 17.

Chahal's IPL 2021 campaign could also determine whether he makes the T20 World Cup squad with the likes of Kuldeep Yadav and Rahul Chahar also in contention for the wrist spinner's role.

Ravindra Jadeja IPL 2021 Cricket
Get the latest updates on IPL 2021, check out the IPL 2021 Schedule and Indian Premier League Live Score . Like us on Facebook or follow us on Twitter for more sports updates. You can also download the NDTV Cricket app for Android or iOS.