"Brothers In Arm": Ravi Shastri Posts Pictures With The Best He Played Against 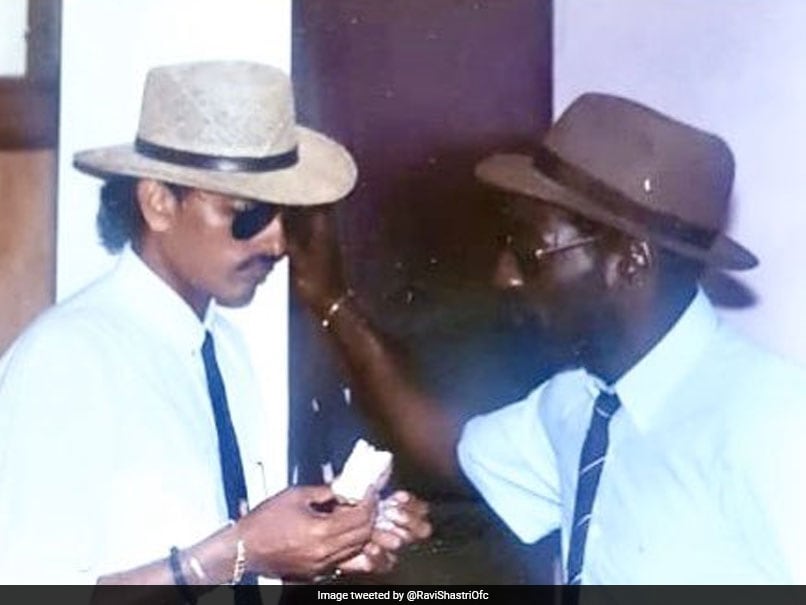 Ravi Shastri, the head coach of Team India, took a trip down memory lane on Saturday as he posted a couple of nostalgic pictures of himself with his "brothers in arms". Ravi Shastri shared throwback pictures with former West Indies greats Malcolm Marshall and Viv Richards. "Brothers in arms. The best I played against. Privilege and honour - with Malcolm Denzil Marshall and Sir Isaac Vivian Alexander Richards @ivivianrichards," Ravi Shastri captioned the image on Twitter.

Brothers in arms. The best I played against. Privilege and honour - with Malcolm Denzil Marshall and Sir Isaac Vivian Alexander Richards @ivivianrichards pic.twitter.com/idlJiXja1D

Viv Richards was considered as the best batsman of his era. Richards played 121 Tests and 187 One-Day Internationals for the West Indies. The hard-hitting batsman from Antigua scored 8540 runs in the longest format of the game and 6721 runs in the limited overs format.

Malcolm Marshall, on the other hand, was one of the most fearsome fast-bowlers that ever played the game.

During his 13-year long career, Marshall picked up 376 Test wickets in 81 appearances for his country. In ODIs, he managed to grab 157 scalps.

Shastri was part of India's successful 1983 World Cup campaign and after representing the country for 11 years, he took over the reigns from Anil Kumble to become the head coach of the team.

In 2018, Shastri helped the team to register their maiden Test series win in Australia.

India went onto defeat Australia 2-1 on their home soil in the four-match series for the first time in 71 years.

Comments
Topics mentioned in this article
Ravi Shastri Isaac Vivian Alexander Richards Malcolm Denzil Marshall Cricket
Get the latest updates on SA vs IND 2021-22, check out the Schedule and Live Score . Like us on Facebook or follow us on Twitter for more sports updates. You can also download the NDTV Cricket app for Android or iOS.