Ranveer Singh shared a photo of him playing the classic Kapil Dev 'Natraj shot' as part of his role in the upcoming film, ''83'. 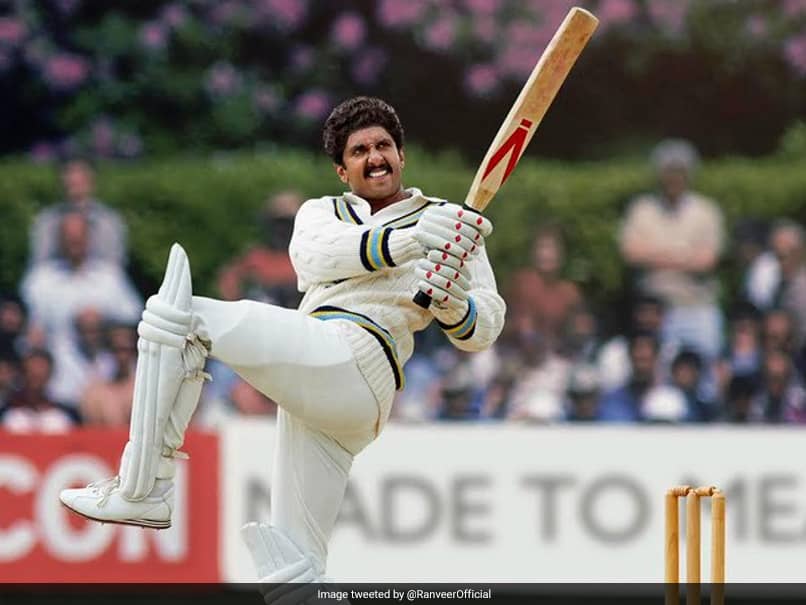 Bollywood actor Ranveer Singh set social media alight when he shared the latest photo from his upcoming film ''83', which is based on India's historic 1983 World Cup triumph. Ranveer Singh plays the role of Kapil Dev, who captained the Indian side in the tournament, leading them to their first ever World Cup trophy, completely against the odds. In the still, Ranveer can be seen playing Kapil Dev's iconic 'Natraj shot', a swivel and pull. The legendary former skipper himself was full of praise for the actor. "Hats off Ranveer!" Kapil Dev wrote while retweeting his photo.

Ranveer's photo also impressed former India cricketer Sanjay Manjrekar, who commended him for looking the part, both with the shot and the gear he is wearing in the photo.

"Well done Ranveer! Not easy to 'pull' this off. Great attention to detail too with gear etc," Manjrekar tweeted.

Well done Ranveer! Not easy to 'pull' this off. Great attention to detail too with gear etc. https://t.co/ZjEHW4Noq6

The mustachioed Ranveer Singh does bear a striking resemblance with Kapil Dev in the picture, sporting that iconic curly hair. The similarities are so strong that the hashtag 'Ranveer Singh as Kapil Dev' became a top Twitter trend earlier on Monday.

India had defeated the mighty West Indies in the 1983 World Cup final, successfully defending a low total of 183. Mohinder Amarnath, who is being played by Saqib Saleem in the movie, won the man-of-the-match in the final for his brilliant figures of 3-12, as India bowled West Indies out for 140.

'83' releasing in April 2020 also features Deepika Padukone as Kapil Dev's wife Romi Bhatia for a small sequence. Harrdy Sandhu plays Madan Lal, Tahir Raj Bhasin will be seen as Sunil Gavaskar and Ammy Virk will slip into the role of Balwinder Sandhu in the movie.

Comments
Topics mentioned in this article
Sanjay Manjrekar Kapil Dev Cricket
Get the latest updates on India vs England Series, India vs England , live score and IPL 2021 Auction . Like us on Facebook or follow us on Twitter for more sports updates. You can also download the NDTV Cricket app for Android or iOS.