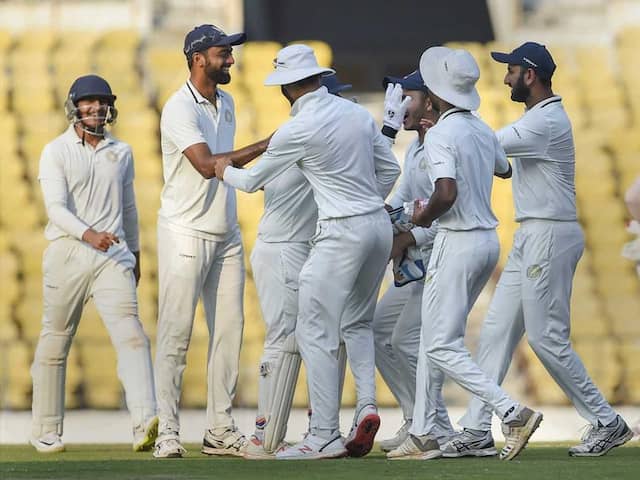 Saurashtra recovered from a faulty start to steady their ship, thanks to the lower order and throw the gauntlet at Vidarbha in the Ranji Trophy final in Nagpur on Tuesday. Resuming at 158/5, Saurashtra's lower order batsmen showed composure to drag the first innings total to 307, just five short of the hosts' first innings score. The hosts, in their second innings, lost captain Faiz Fazal (10) and R.Sanjay (16) to left-arm spinner Dharmendrasinh Jadeja (2/36) before ending the day at 55/2. At the close of play, veteran Wasim Jaffer (5) and Ganesh Satish (24) were at the crease.

Earlier, overnight batsman Snell Patel (102) completed his first century of the season and when India pacer Umesh Yadav sent him back, Saurashtra were still 128 runs away from Vidarbha's total of 312.

Saurashtra's tail then batted excellently after Prerak Mankad was also dismissed by Sarwate.

Off-spinner Akshay Wakhare broke the partnership by getting Makwana caught at first slip and Sarwate got rid of Jadeja in the same fashion to complete his five-wicket haul.

But there was no respite for the hosts as captain Jaydev Unadkat (46) and Chetan Sakariya (28) continued the fightback.

They added 60 runs for the last wicket as they got tantalisingly close to a first-innings lead.

Unadkat then swept one straight to square leg fielder Sanjay.

In Vidarbha's second essay, Sanjay survived a strong leg-before appeal, a caught and bowled chance off Makwana before finally getting stumped by Jadeja, who had also bowled the rival skipper.

In the morning session, Patel swept Akshay Karnewar to reach his three-figure mark.

Umesh Yadav then succeeded in getting Patel caught behind.

Umesh Yadav Wasim Jaffer Cricket
Get the latest Cricket news, check out the India cricket schedule, Cricket live score . Like us on Facebook or follow us on Twitter for more sports updates. You can also download the NDTV Cricket app for Android or iOS.