Mumbai reduced Tamil Nadu to 249 for seven in their first innings to take control of the Ranji Trophy Group B match in Chennai on Monday. 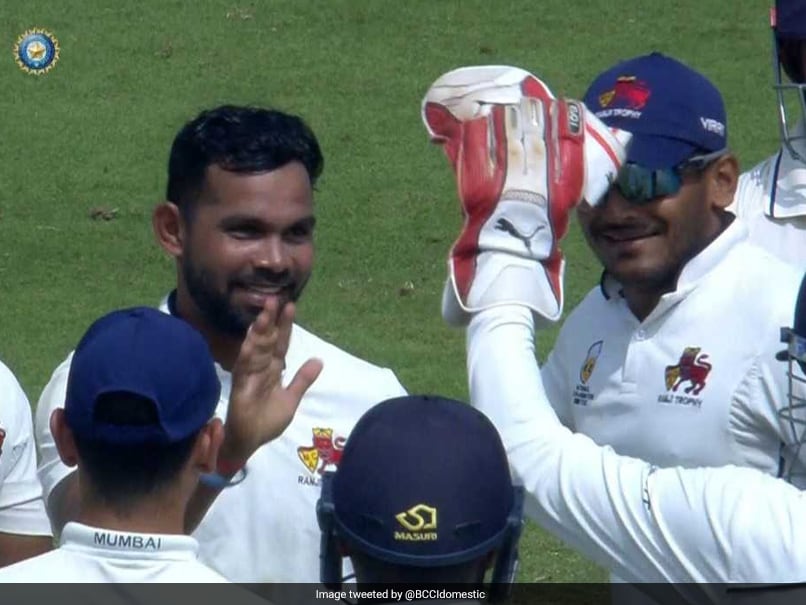 Ranji Trophy: A disciplined bowling effort put Mumbai on top vs Tamil Nadu in the Group B match.© Twitter

A disciplined bowling effort helped Mumbai reduce Tamil Nadu to 249 for seven in their first innings to take control of the Ranji Trophy Group B match in Chennai on Monday. Tamil Nadu now trail by 239 runs at stumps on the third and penultimate day. Mumbai had declared their first innings at 488 on the second day on Sunday. Shams Mulani (2/59), Tushar Deshpande (2/47) and Royston Dias (2/34) took two wickets each for the visitors. A middle-order collapse which saw the home side lose three wickets without a run being scored reduced them to 178 for 5 and subsequently to 195 for 7 before the experienced Ravichandran Ashwin (32 batting, 96 balls, 2 fours) and R Sai Kishore (17 batting) came up with a rearguard action.

The two added 54 runs and played out the final session, frustrating Mumbai and making skipper Aditya Tare try out several bowlers. Resuming at the overnight 66 for no loss, the home side received an early jolt when Test discard Abhinav Mukund (58) fell after adding just six runs to his overnight score.

The other opener L Suryapprakash, who made 41 in 169 balls (6 fours, 1 six), was the next to go, caught by Tushar Deshpande off debutant Vinayak Bhoir.

M Kaushik Gandhi, who was recalled to the Tamil Nadu squad a couple of matches ago, batted well and held one end up as the visiting side kept things tight. He looked good for a big one before charging out to a delivery from Shams Mulani to be stumped by Adiyta Tare for 60.

Skipper Baba Aparajith (14) fell leg-before-wicket to Deshpande and two wickets followed in quick succession without the addition of any run.

Baba Indrajith, the comeback man, on whom a lot depended, fell to a brilliant catch by Jay Bista off Royston Dias for 6.

Dinesh Karthik, who batted at No. 7, after having missed a major part of play on Sunday owing to back spasms, followed Pradosh Ranjan Paul (0).

Ashwin and Sai Kishore showed a lot of patience and hung on even as Tare brought changes in an effort to break the stubborn eighth-wicket partnership.

Speaking at the end of play, Tare praised the bowlers for their disciplined effort and the fielding, especially by Jay Bista, who took two superb catches.

Aditya Tare Abhinav Mukund Tushar Deshpande Shams Mulani Baba Aparajith Royston Dias Cricket
Get the latest updates on IPL Auction 2023 and check out  IPL 2023 and Live Cricket Score. Like us on Facebook or follow us on Twitter for more sports updates. You can also download the NDTV Cricket app for Android or iOS.