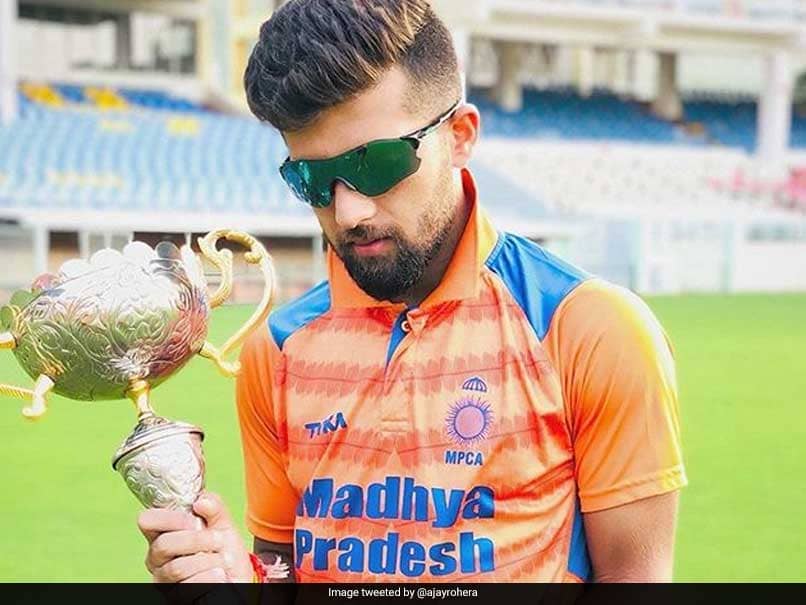 Ajay Rohera made history in first-class cricket by becoming the highest run-scorer on debut, when he scored 267 runs for Madhya Pradesh on Saturday. The 21-year-old Rohera's unbeaten knock was laced with 21 boundaries and five hits over the fence. Rohera, who broke the previous record of 260 runs set by Amol Muzmudar in 1994 on his debut for Mumbai, said that he idolises cricket great Sachin Tendulkar. Meanwhile, Madhya Pradesh, who were handed a huge boost by their debutant, are currently in second spot in the Elite Group A and B table after five matches, trailing Saurashtra by a point.

Rohera also said that he wants his state team to win their maiden title in the prestigious domestic tournament.

"I will make a fresh start in coming matches. Now, my world record is a matter of history. I will be able to score runs as early as I forget this record," he said.

"As a player, I want to keep things simple. If I show haste in the coming matches, things will get difficult day-by-day," Rohera said.

Asked what was going on in his mind while chasing the world record at the Holkar Stadium, Rohera said, "I was thinking to perform naturally through my bat. I was not thinking to do something different."

He said, "Tendulkar is my all-time ideal in the cricket world and I always draw inspiration from him."

The cricketer's father Rajkumar Rohera hails from Dewas near Indore and runs an ice cream manufacturing unit, while his mother Priya Rohera is a housewife.

Just three days ahead of the Ranji match against Hyderabad, Rohera was included in the MP squad in place of right-handed batsman Ankit Dane.

The opener had led Madhya Pradesh's under-23 team in the CK Naidu Trophy.

Due to Rohera's superlative performance, Madhya Pradesh defeated Hyderabad by 253 runs and registered their third consecutive win in the Ranji Trophy Elite Group B.

Madhya Pradesh have never won the Ranji Trophy. Their best performance came in 1998-1999 when they finished runners-up, losing in the final to Karnataka.