Rahul Dravid's Advise Of "Focusing On One Ball At A Time" Has Helped Me, Says Yashasvi Jaiswal

Yashasvi Jaiswal, who rose to fame after he became the youngest Indian to slam a double hundred in List A cricket, is part of India's U-19 World Cup squad. 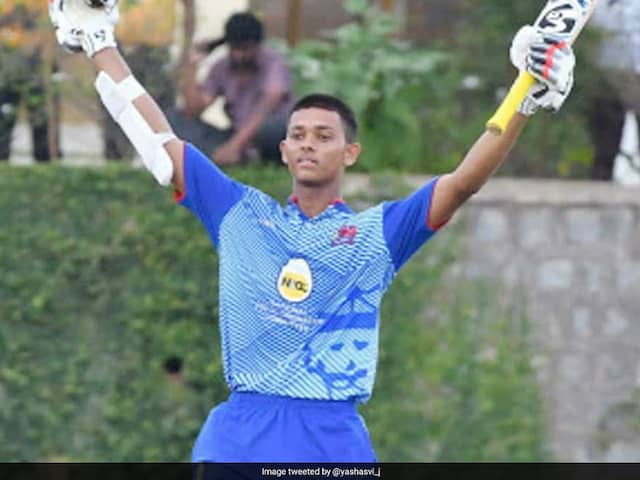 Young prodigy Yashasvi Jaiswal on Thursday said batting stalwart Rahul Dravid had advised him to focus on each ball and this suggestion immensely helped him. The 17-year-old Mumbai batsman has become one of the most talked about cricketers after his sterling performance in the Vijay Hazare Trophy. "Rahul (Dravid) sir guides us so well. His plans for a practice session are so clear that we know well in advance of a practice session about areas to work on. He advised me to focus on one ball at a time and it has helped me immensely," Jaiswal, selected in the Indian squad for 2020 ICC Under-19 Cricket World Cup told reporters in Mumbai.

Jaiswal and Divyansh Saxena, another member of the U-19 World Cup team, were felicitated by Ajinkya Rahane in presence of legendary batsman Dilip Vengsarkar and former India batting coach Sanjay Bangar in Mumbai.

The duo plays for the iconic Dadar Union, which has produced several Test cricketers.

Mumbai's Atharva Ankolekar, a spinner, has also been included in the squad.

Jaiswal said he would treat the 50-over World Cup like any another assignment and stick to the process he has been following till now.

"I will just try to treat it like just another assignment and stick to the same process that I have followed all along.

"I anyway don't think too much about results, so I will just stick to my routine and will try to give my best," he said.

Jaiswal, who comes from a humble background, played for the senior Mumbai team in the Vijay Hazare Trophy, where he slammed three hundreds, including a double ton.

"Both are excellent platforms but they have their own challenges. The senior domestic set-up has oppositions with so much of experience so they plan better than U-19 but even U-19 isn't easy.

"With the experience at the senior level, I felt I had to optimise my experience. It taught me a lot to be consistent," added Jaiswal.

Saxena, on his part, said his immediate target would be to settle in conditions in South Africa, where the U-19 World Cup will be played in January-February.

Saxena said Dravid is open to discussion and tells him about mental preparation for matches.