Vijay Hazare Trophy: Abhimanyu Mithun claimed five wickets, including a hat-trick, while Mayank Agarwal top scored for Karnataka with 69 not out. 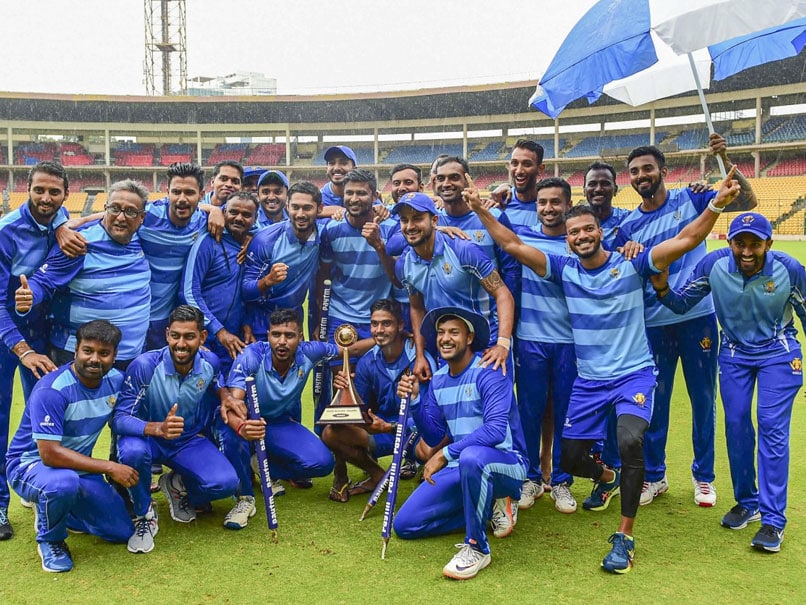 Riding on brilliant performances from Abhimanyu Mithun (5/34) and Mayank Agarwal (69*), Karnataka defeated Tamil Nadu by 60 runs through VJD Method in the final of the 2019 Vijay Hazare Trophy played at the M Chinnaswamy Stadium on Friday. Chasing 253, Karnataka were well on course for a victory at 146/1 after 23 overs having Mayank and KL Rahul batting on 69 and 52 respectively when rain stopped play. Umpires waited for almost 45 minutes and thereafter felt that no further play would be possible and announced Karnataka as champions. They have now won the title four times.

Earlier, Mithun became the first bowler to pick up a hat-trick in the final and helped Karnataka to restrict Tamil Nadu to 252 in 49.5 overs despite well-rounded fifties from Abhinav Mukund (85) and Baba Aparajith (66).

Mithun, who was celebrating his 30th birthday, dismissed Shahrukh Khan (27), M. Mohammed (10) and Murugan Ashwin (0) in the final over of the Tamil Nadu innings to become the first Karnataka bowler to pick a List A hat-trick.

Before that Mithun had removed Murali Vijay for a duck (in the first over) and Vijay Shankar (38) in the 46th over, to dent the Tamil Nadu innings.

Karnataka, unlike their bowling, didn't have a great start to their chase as they lost opener Devdutt Padikkal (11) in the fifth over. Mayank, who was in fine form during the recently concluded Test series against South Africa, continued with his imperious run and joined forces with Rahul to take the team to a commanding position.

The hosts looked all set to win the summit clash when rain played spoilsport in the 23rd over of the chase and no further play was possible, forcing the umpires to take the help of VJD method to declare the winners.

The VJD method is a method of calculating target scores in rain-truncated limited overs cricket matches, devised by a civil engineer from Kerala, V Jayadevan. It is a method that is an alternative to the DLS (Duckworth, Lewis and Sterne) method.

M.Chinnaswamy Stadium, Bengaluru Cricket
Get the latest updates on ICC T20 Worldcup 2022, check out the Schedule and Live Score. Like us on Facebook or follow us on Twitter for more sports updates. You can also download the NDTV Cricket app for Android or iOS.