Vijay Hazare Trophy: Karnataka Look To Make Most Of Home Advantage In Final Against Tamil Nadu

Vijay Hazare Trophy: Karnataka, would want to make most of the home advantage, while Tamil Nadu led by Dinesh Karthik would like to spoil their party in summit clash. 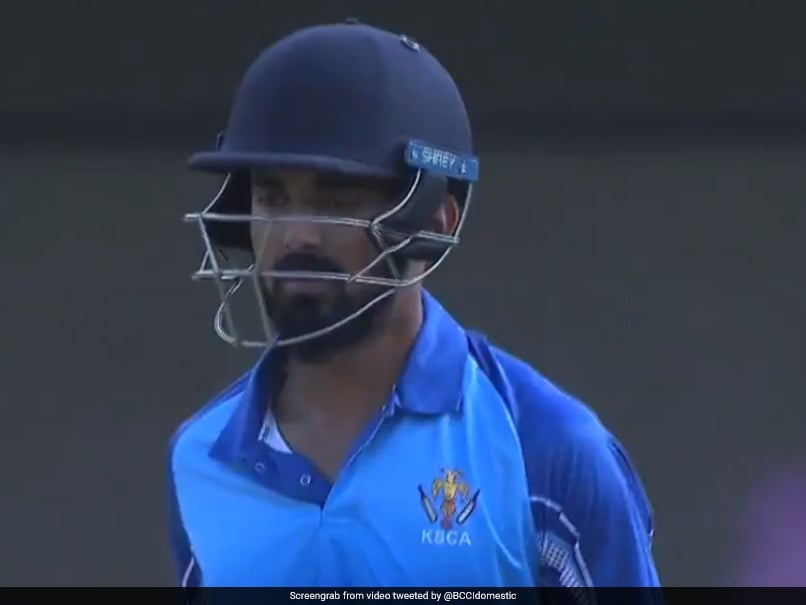 The spotlight will be on India players Mayank Agarwal, R Ashwin and KL Rahul when the evenly-matched Karnataka and Tamil Nadu lock horns in the title clash of the Vijay Hazare Trophy in Bengaluru on Friday. The Manish Pandey-led Karnataka were convincing in their victories in the knockout games but Tamil Nadu, who dominated the league phase, were a tad lucky as the rain rule allowed them to go past Punjab in the quarterfinals before young M Shahrukh Khan guided them home in the semifinal against Gujarat.

The two sides are equally matched, with a formidable batting line-up and a set of quality bowlers, though the presence of R Ashwin gives the Tamil Nadu attack more experience and variety.

The Friday's clash will be decided by how the two bowling attacks perform given that both teams have a lot of depth in batting.

The home side has been well served by out-of-favour Test opener KL Rahul(546 runs in 10 games), who has come into his own in the quarterfinals and semis and his opening partner Devdutt Padikkal (598 runs from 10 matches).

Captain Manish Pandey has been in good touch too and he will look to pull his weight in the summit clash as would Mayank and Test discard Karun Nair.

Skipper Dinesh Karthik has donned the finisher role with some telling knocks and would be expected to lead from the front in the final.

All-rounder Vijay Shankar and young Shahrukh Khan have made crucial contributions with the latter putting his hand up in a tricky chase on Wednesday.

The Karnataka bowling has seen an unlikely hero emerge with V Kousik picking up four wickets in the semifinal demolition of Chhattisgarh while the pacers -- experienced Abhimanyu Mithun and Prasidh Krishna -- and the spinners K Gowtham, Shreyas Gopal and Praveen Dube among the wickets.

The host bowlers will be up against a confident Tamil Nadu batting line-up and stopping it will hold the key to success.

Off-spinner R Ashwin and leg spinner Murugan Ashwin will be aware that the Chinnaswamy stadium with its small boundaries can be tough on the bowlers and have a huge task of containing the likes of Rahul, Mayank and others.

The role of the Tamil Nadu medium-pacers T Natarajan, M Mohammed and K Vignesh would be crucial as getting early wickets can have a huge impact on the game.

The final offers Tamil Nadu a chance for redemption after the horror run in the previous two seasons while Karnataka which hasn't had a great 2018-19 season will also look to start with a bang with a title win.

Match starts at 9am.

Karun Nair Cricket
Get the latest updates on ICC Women's Cricket World Cup 2022 and IPL 2022, check out the Schedule , Live Score and IPL Points Table. Like us on Facebook or follow us on Twitter for more sports updates. You can also download the NDTV Cricket app for Android or iOS.