Abhimanyu Mithun became the first Karnataka bowler to take a hat-trick in the Vijay Hazare Trophy. 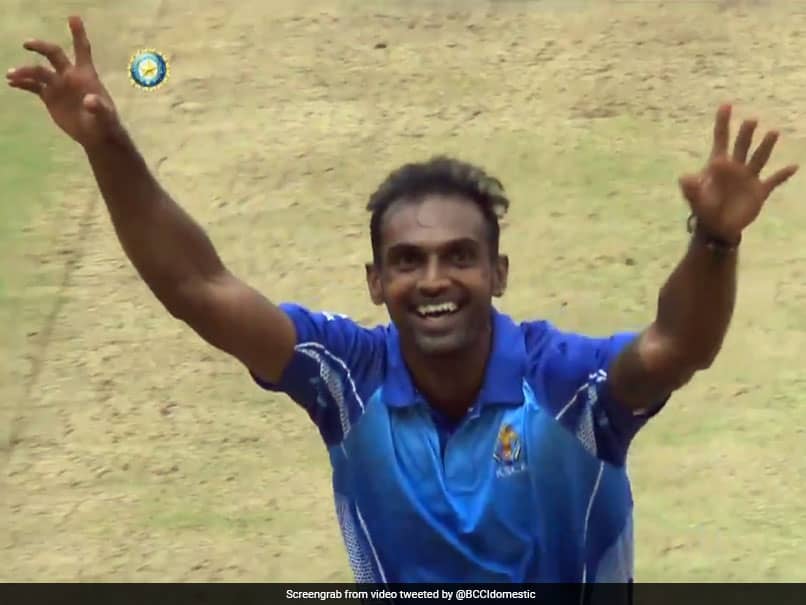 Abhimanyu Mithun achieved the feat on his 30th birthday.© Twitter

Right-arm medium pacer Abhimanyu Mithun on Friday became the first Karnataka bowler to take a hat-trick in the Vijay Hazare Trophy. Mithun achieved the feat on his 30th birthday during the summit clash between Tamil Nadu and Karnataka at the M Chinnaswamy Stadium. The 30-year-old dismissed Shahrukh Khan (27), M Mohammed (10) and Murugan Ashwin (0) in the final over of the Tamil Nadu innings. On the third delivery of the 50th over, he removed Shahrukh who was caught by Manish Pandey at long-off. Mohammed was the next to go as he was caught brilliantly by Devdutt Padikkal in the deep.

A Hat-trick for Abhimanyu Mithun in the final over, becomes the first Karnataka bowler to take a hat-trick in #VijayHazare Trophy.
Tamil Nadu bowled out for 252 in 49.5 overs#KARvTN @paytm pic.twitter.com/A17K50jAxW

Murugan became the third victim of Mithun as he was caught at extra cover by Krishnappa Gowtham and brought an end to Tamil Nadu innings on 252.

Before that Mithun had removed Murali Vijay for a duck in the first over to give a solid start to Karnataka. He got his second wicket later in the 46th over, when Karun Nair plucked a fine catch at long-on to dismiss Vijay Shankar (38).

Mithun finished with figures of 5/34, his first five-wicket haul in List A cricket, and became the first bowler to take a hat-trick in the Vijay Hazare Trophy final.

Comments
Topics mentioned in this article
Abhimanyu Mithun Cricket
Get the latest updates on IPL 2021, IPL Points Table , IPL Schedule 2021 , live score . Like us on Facebook or follow us on Twitter for more sports updates. You can also download the NDTV Cricket app for Android or iOS.