With the Indian team and the family members reaching England and getting into quarantine, many images have been shared on social media, with Ravichandran Ashwin chipping in with a "jet lagged" picture with his daughters. 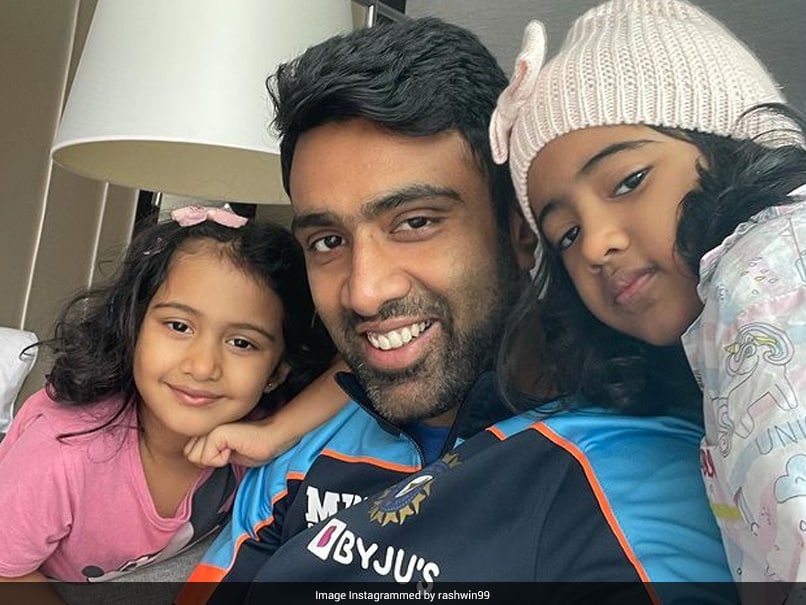 R Ashwin poses for a photo with his daughters.© Instagram

India spinner Ravichandran Ashwin has shared an adorable photograph with his two daughters from quarantine in England. Though they look cute in the image, Ashwinsaid their faces appeared "jet lagged". The Instagram image, showing all the three looking into the camera, was clicked at a facility inside the Southampton Stadium, where members of the Indian cricket team and their families are undergoing the mandatory 10-day quarantine before the start of the World Test Championship (WTC) final on June 18, in which India will be taking on New Zealand.

The post has been liked by more than 1.23 lakh people within two hours of being posted. A lot of people have also commented on the post.

"Lovely picture," said a person with the username Deepak90_shreyas41.

This is not the first time Ashwin has shared an image of his daughters from quarantine. A week ago, he had shared another image with them when they were in quarantine in Mumbai before flying to the UK.

The Indian team flew to England and has now reached Southampton where the WTC final is to be played. The Board of Control for Cricket in India (BCCI) shared a video documenting the entire journey of the Indian contingent for the more than 100 days stay in the UK.

It showed players reaching the Mumbai airport and then arriving at London's Heathrow airport. They then took a bus ride to the Ageas Bowl cricket ground.

Excitement is building up as #TeamIndia arrive in England pic.twitter.com/FIOA2hoNuJ

The Ageas Bowl has a hotel within the stadium complex and that's where the team is quarantining. After the WTC final, India will take on hosts England in a five-Test series starting at Trent Bridge, Nottingham, from August 4.

Ravichandran Ashwin India vs New Zealand, Final Cricket
Get the latest updates on ICC T20 Worldcup 2022 and CWG 2022 check out the Schedule, Live Score and Medals Tally. Like us on Facebook or follow us on Twitter for more sports updates. You can also download the NDTV Cricket app for Android or iOS.