At stumps on Day 3, New Zealand were reduced to 26-2 in the second innings with openers Jeet Raval (0) and Tom Latham (10) getting out cheaply. 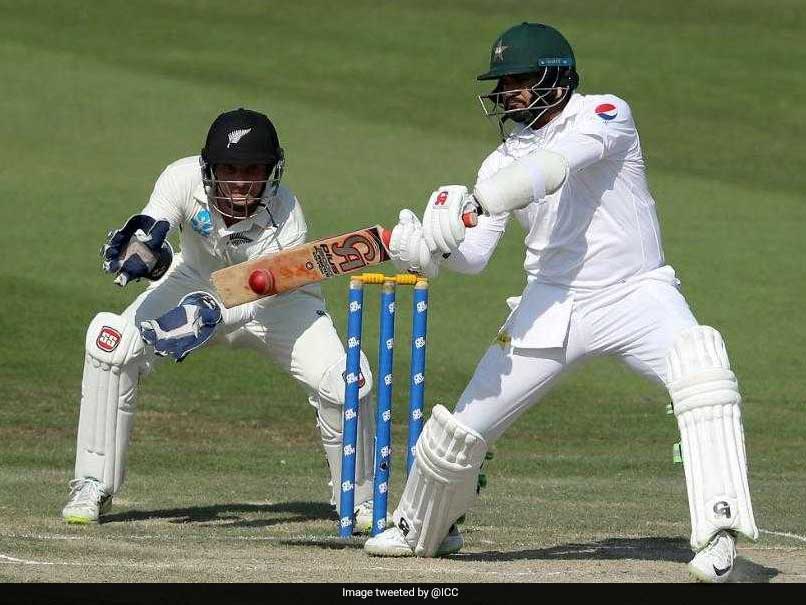 Azhar Ali (134) scored his 15th century in Test cricket on Day 3 of the 3rd Test vs New Zealand.© Twitter

A mammoth 201-run fourth-wicket partnership between Azhar Ali and Asad Shafiq helped Pakistan take a crucial 74-run lead in the first innings on Day 3 of the third and final Test against New Zealand in Abu Dhabi on Wednesday. After getting bundled out for 348, Pakistan ended the day in a commanding position as New Zealand were 26/2 in their second innings at stumps. Smashing his 15th Test hundred, Azhar ended up scoring 134 while Shafiq scored 104 before debutant off-spinner Will Somerville (4-75) ran through the Pakistan lower middle order. For New Zealand, Kane Williamson was unbeaten on 14 and giving him company was nightwatchman William Somerville. New Zealand are trailing Pakistan by 48 runs with eight wickets intact.

Paceman Shaheen Shah Afridi trapped Jeet Raval for a nought while leg-spinner Yasir Shah had Tom Latham caught for ten, his 199th wicket in Tests. Yasir now needs just one more wicket to become the fastest to 200 wickets, in his 33rd Test, a record currently held by Australian leg-spinner Clarrie Grimmett who reached the milestone in 36 Tests, 82 years ago.

Shafiq after the day's play asserted that Pakistan must limit New Zealand in their second innings after his side failed to chase down 176 in the first Test.

"It's always nice to bat with Azhar," said Shafiq. "But it was disappointing that we couldn't get a big lead. It happens in cricket and you have to give credit to the bowlers.

"We need to get them out quickly tomorrow so that we don't need to chase a lot of runs."

Azhar and Shafiq put on 201 for the fourth wicket, but once they were dismissed only Sarfraz Ahmed (25) and Babar Azam (14) offered some resistance.

Azhar edged medium pacer Colin de Grandhomme through the slips to complete his first century since May 2017 against the West Indies in Dominica - and his first hundred against New Zealand.

He took 210 balls to reach the three-figure mark, before being caught sweeping off Somerville, just before tea.

Shafiq brought up his 12th Test ton with a sharp single off Somerville before falling leg-before to Patel to a straight delivery.

Somerville then had Azam and Hasan Ali (nought) bowled and wrapped up the innings by getting Sarfraz caught at mid-wicket.

Earlier, Azhar and Shafiq frustrated New Zealand's search for early wickets as they took Pakistan to 224-3 at lunch.

New Zealand skipper Williamson took the second new ball in the 81st over with Pakistan comfortably placed at 213-3, but the bowlers struggled to extract much life from a flat pitch at the Sheikh Zayed Stadium.

Pakistan levelled the series with an innings and 16-run win in the second Test in Dubai.

Sheikh Zayed Stadium, Abu Dhabi Cricket Pakistan vs New Zealand, 3rd Test
Get the latest updates on Fifa Worldcup 2022 and check out  Fifa World Cup Schedule, Stats and Live Cricket Score. Like us on Facebook or follow us on Twitter for more sports updates. You can also download the NDTV Cricket app for Android or iOS.