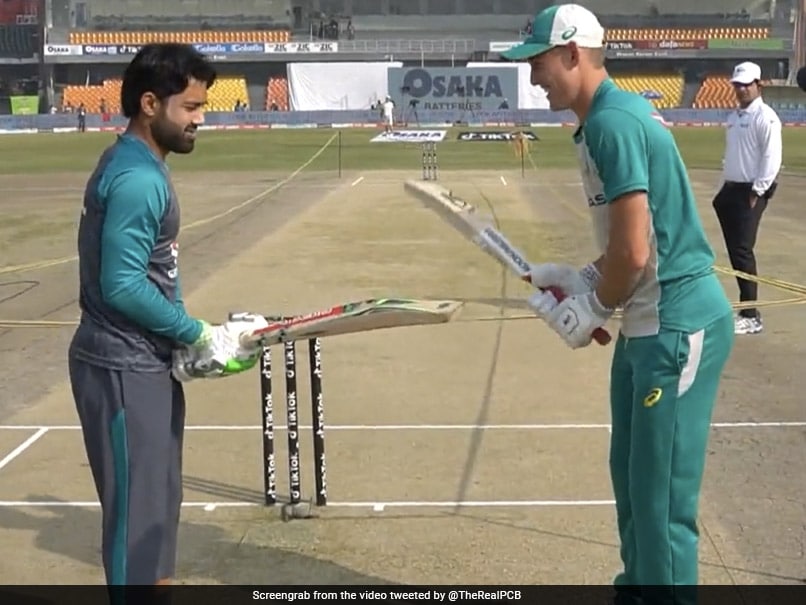 Marnus Labuschagne corrected Mohammad Rizwan a couple of times before showing exactly how it is done.© PCB/Twitter

The Pakistan vs Australia Test series has gone to a decider after the first two Tests ended in draw. It's all to play for both teams in the third and final Test that began in Lahore today. The Test series has been played in great spirit so far and that continued before the start of the third Test. Ahead of start of play on Day 1 on Monday, some players from both teams were seen bonding together. Pakistan cricketers Mohammad Rizwan and Sajid Khan were seen trying to imitate Steve Smith's batting style, overseeing all this was Smith's teammate Marnus Labuschagne.

Rizwan and Sadiq Khan both tried their hands at the now famous Smith leave. Labuschagne then went on to correct Rizwan a couple of times before showing the duo exactly how it is done.

Pakistan Cricket Board (PCB) tweeted a video of the entire episode with a question: "Who did the Smith imitation better?"

In the match, Labuschagne failed to live up to his high standards, dismissed for a duck for the second time in the series.

Australia won the toss and elected to bat. David Warner (7) and Labuschagne were dismissed in the third over of the match by Pakistan's star pacer Shaheen Afridi.

However, Usman Khawaja continued his rich vein of form, notching yet another half-century to put the Aussies in a strong position. Giving him company was Steve Smith.

At the time of writing this, Australia were 120 for 2 in 44 overs with Khawaja unbeaten on 56 while Smith batting on 46.

After the culmination of the Test series, the two teams will clash in a three-match ODI series, followed by a solitary T20I. All the white-ball matches will be played in Lahore.

Steven Smith Mohammad Rizwan Marnus Labuschagne Pakistan vs Australia, 3rd Test Cricket
Get the latest updates on IPL Auction 2023 and check out  IPL 2023 and Live Cricket Score. Like us on Facebook or follow us on Twitter for more sports updates. You can also download the NDTV Cricket app for Android or iOS.