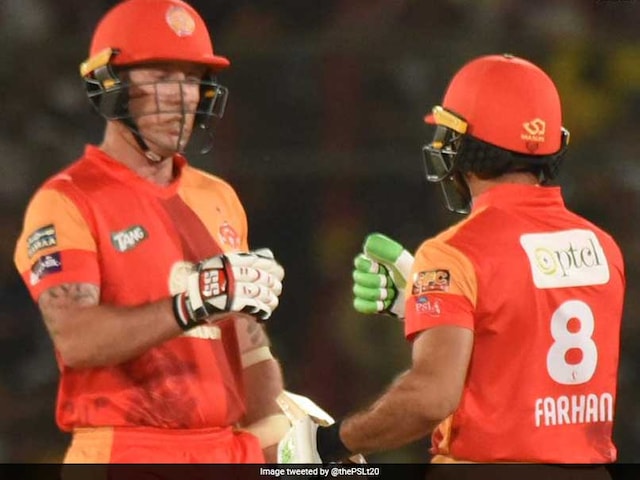 Islamabad United clinched their second Pakistan Super League (PSL) title after a thrilling 3-wicket win over Peshawar Zalmi on Sunday. They clinched the trophy for the second time in three years. In reply to Peshawar Zalmi's 148/9, Islamabad United chased down the target in 18.5 overs. Riding on a stellar knock by opener Luke Ronchi, Islamabad got off to a flying start. Ronchi reached his half-century in only 25 balls. He hit four boundaries and five sixes in the process and was ably supported by Sahibzada Farhan. Ronchi was eventually dismissed for 52 runs after getting caught by Andre Fletcher off Chris Jordan's delivery. Both Ronchi and Farhan gave Islamabad a perfect start as the duo stitched a 96-run partnership for the first wicket. After Ronchi's departure, Peshawar Zalmi fought back with two quick wickets in the 10th and 11th over. Chadwick Walton (0) and skipper Jean-Paul Duminy (2) fell cheaply.

Samit Patel came in at number 5 to stabilise the innings. Farhan was the third wicket to fall for Islamabad as he departed for 44 runs. Jordan and Umaid Asif were the pick of the bowlers for Peshawar. Mohammad Hafeez took a blinder to dismiss Patel (10) in the 13th over off Hasan Ali's delivery. His wicket brought Peshawar in the game. Jordan picked another blinder of a catch to dismiss Shadab Khan in the 14th over to peg back Islamabad. Islamabad were at one stage on 96/1 after which they lost five wickets for 20 runs in their run chase. Kamran Akmal gave Islamabad batsman Hussain Talat some breathing space after he dropped a simple catch in the 15th over. Asif Ali hit three back-to-back sixes to dispel any hopes of Peshawar comeback in the 16th over off Hasan Ali's deliveries. Asif hit the winning runs with a huge six to help his team cross the finishing line.

Earlier, a brilliant bowling display by Islamabad United helped restrict Peshawar to 148/9 in 20 overs. Shadab Khan (3/25), Samit Patel (2/26) and Hussain Talat (2/18) contributed with their good bowling to halt Peshawar's charge. Jordan (36) and Liam Dawson (33) built a crucial partnership in the middle overs to help their team get to a modest total. Wahab Riaz hit a quick-fire 14-ball 28 runs, in the end, enabling his team post a competitive total. Islamabad kept on taking wickets at regular intervals and halted the Peshawar team's progress.

Comments
Topics mentioned in this article
Luke Ronchi Darren Sammy Cricket
Get the latest Cricket news, check out the India cricket schedule, Cricket live score . Like us on Facebook or follow us on Twitter for more sports updates. You can also download the NDTV Cricket app for Android or iOS.