On Zaheer Khan's Birthday, A Hilarious Reminder From Virender Sehwag

Zaheer Khan's expertise with the ball made him indispensable to the Indian side. He played a major role in India's 2011 World Cup triumph with 21 wickets in the tournament. 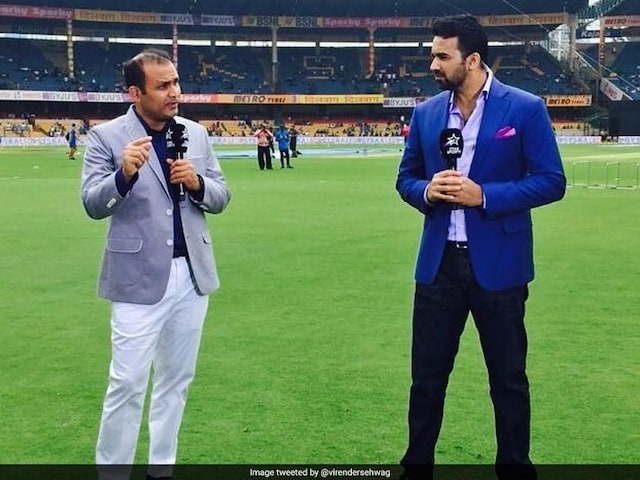 Virender Sehwag has made it a habit to wish his fellow cricketers on their birthday and at the same time giving them quirky nicknames. On Saturday, Sehwag took to Twitter to wish former India pacer Zaheer Khan on his birthday. Sehwag heaped praise on his former teammate, saying "Happy Birthday to one of India's greatest ever bowler and one of the sharpest cricketing brain." However, on the sides, the former India opener was once again up to his hilarious tricks. Sehwag provided Zaheer and the entire world a gentle reminder by writing #LastBachelorsBirthday.

Sehwag's hashtag could have two meanings. One being that the former pacer is the last bachelor left among his contemporaries like Yuvraj Singh, Harbhajan Singh, MS Dhoni, Gautam Gambhir and Sehwag himself. While the other is that this would be Zaheer's last birthday as a bachelor following his engagement to Bollywood actress Sagarika Ghatge earlier this year.

Happy Birthday to one of India's greatest ever bowler and one of the sharpest cricketing brain, Gyaan Baba @ImZaheer #LastBachelorsBirthday pic.twitter.com/4EybZYwobb

Meanwhile, other cricketers like VVS Laxman and Aakash Chopra too praised Zaheer for his contribution.

Happy birthday to a wily bowler , wonderful man and a great friend @ImZaheer .Have a great year Zak ! pic.twitter.com/FzNJEVIFUq

Comments
Topics mentioned in this article
India Cricket Team Virender Sehwag Zaheer Khan Cricket
Get the latest Cricket news, check out the India cricket schedule, Cricket live score . Like us on Facebook or follow us on Twitter for more sports updates. You can also download the NDTV Cricket app for Android or iOS.