New Zealand might have been handed one of its heaviest defeats in Test cricket, but captain Kane Williamson remained gracious as ever. 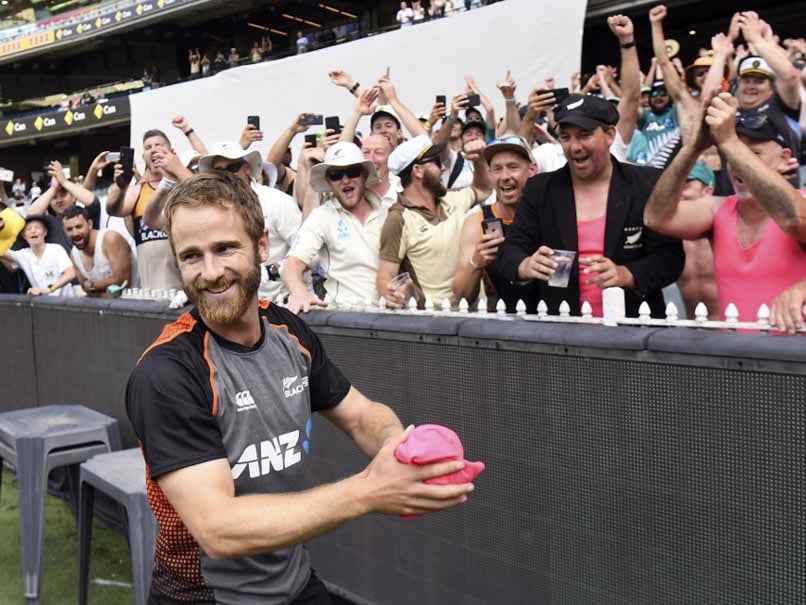 Kane Williamson was greeted by loud cheers from the New Zealand fans.© AFP

New Zealand were trounced by hosts Australia in the second Test at the Melbourne Cricket Ground (MCG) on Sunday and in the process also ended up conceding the three-match series with the hosts taking an unbeatable 2-0 lead. His team might have been handed one of its heaviest defeats in Test cricket, but captain Kane Williamson remained gracious as ever. After the match, the New Zealand skipper was seen speaking to a section of New Zealand fans at the MCG, thanking them for their continuous and vociferous support despite the massive loss.

"I know we are circled by authorities, and I hope you are all behaving. But the support around this Test match has truly been special and the guys hugely appreciate it. I imagine footballers feel a little bit like this, despite the result. But the passion has been truly inspiring. We want to thank you guys," Kane Williamson said in his address to a section of the New Zealand fans at the MCG.

After Williamson finished speaking, he was greeted by loud cheers from the New Zealand fans.

#SteadyTheShip with a big "Thanks Mate!" to all the Great New Zealanders who sung their hearts out all Test in support of the @BLACKCAPS! #BoxingDayTest #AUSvNZ pic.twitter.com/tSgj5ERtad

The New Zealand captain was also hailed for his brilliant gesture on Twitter.

What a great man

Champion, both on and off the field.

How good is THAT!!! What a star Kane is

King Kane! Every time he sets the bar so high being a leader and the way he carries himself. So much the younger generation and the current can learn from him.

In the match, Nathan Lyon took four wickets as Australia thrashed New Zealand by 247 runs to win the second Test at Melbourne and the series with a battling century from opener Tom Blundell proving futile.

The Black Caps, chasing a massive 488 to win, were in serious trouble after a fiery James Pattinson ripped through the top order to leave them reeling at 38 for three. But some fighting partnerships spearheaded by Blundell delayed the inevitable until Lyon worked his magic as the pitch deteriorated.

Blundell was last man out for a swashbuckling 121 -- his second Test century and his first for two years -- as New Zealand were dismissed for 240 with Trent Boult not batting after fracturing his hand in the first innings.

It was the second heavy defeat for the Black Caps, who lost by 296 runs in Perth and will be playing for pride only in the final Test at Sydney later this week.

Melbourne Cricket Ground Cricket Australia vs New Zealand, 2nd Test
Get the latest updates on ICC Women's Cricket World Cup 2022 and IPL 2022, check out the Schedule , Live Score and IPL Points Table. Like us on Facebook or follow us on Twitter for more sports updates. You can also download the NDTV Cricket app for Android or iOS.