Australia beat New Zealand by 247 runs to win the second Test and the series on Sunday with a battling century from opener Tom Blundell proving futile. 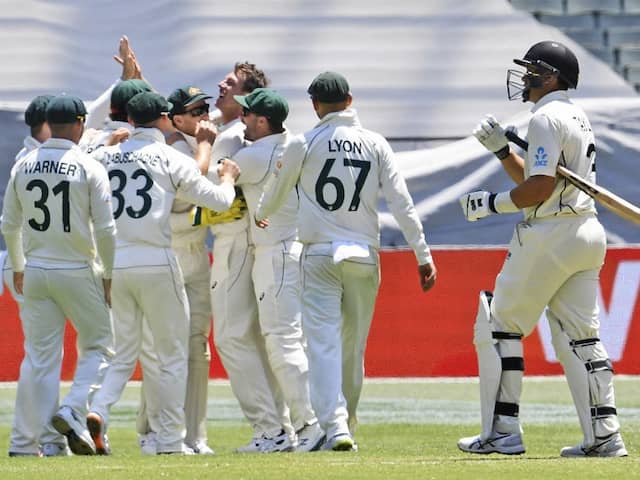 Australia won the 2nd Test by 247 runs to take an unbeatable 2-0 lead in the 3-match Test series.© AFP

Nathan Lyon took four wickets as Australia thrashed New Zealand by 247 runs to win the second Test at Melbourne and the series Sunday with a battling century from opener Tom Blundell proving futile. The Black Caps, chasing a massive 488 to win, were in serious trouble after a fiery James Pattinson ripped through the top order to leave them reeling at 38 for three. But some fighting partnerships spearheaded by Blundell delayed the inevitable until Lyon worked his magic as the pitch deteriorated. Blundell was last man out for a swashbuckling 121 -- his second Test century and his first for two years -- as New Zealand were dismissed for 240 with Trent Boult not batting after fracturing his hand in the first innings.

It was the second heavy defeat for the Black Caps, who lost by 296 runs in Perth and will be playing for pride only in the final Test at Sydney later this week.

"It's very pleasing. I thought the way we went about this Test from the moment we lost the toss was outstanding," said Australia captain Tim Paine.

"I thought our batters applied themselves superbly on day one and made it easy for Travis (Head) and I on the second day to set up a big total."

It was Head's first innings century and Paine's quick-fire 79 that took the Test out of New Zealand's reach after captain Kane Williamson's bold decision to bowl after winning the toss.

No team had ever chased down more than 418 in Test history, though the record was set against Australia by the West Indies in Antigua in 2003.

"I felt like there was enough in the surface to bowl first," said Williamson.

"It was obviously very important for us to be on top of our game and the surface did offer some sideways movement and swing. But credit to Australia for getting through that first session and putting 400 on the board.

"They've got a fantastic attack with pace and bounce but their accuracy stood apart and they did seem to get more out of that surface."

Pattinson, playing for the injured Josh Hazlewood, did the early damage.

New Zealand had reached 32-0 when he snared the key wickets of Tom Latham, batting linchpin Williamson and the experienced Ross Taylor for three just runs.

Latham, scorer of a dogged 50 in New Zealand's 148 first innings, fell for eight when he edged a thunderous delivery to the diving Paine.

Taylor didn't fare much better, dragging onto his middle stump to leave Pattinson with figures of 3-5 at lunch off two overs.

Henry Nicholls was the only wicket to fall between lunch and tea, cleverly stumped for 33 by Paine off Lyon just one ball after he smashed the spinner for six.

Blundell, in only his third Test, and BJ Watling put on 72 before Lyon finally broke their dangerous partnership, tempting an outside edge from the New Zealand wicketkeeper that flew to David Warner at slip and he was gone for 22.

Lyon then mopped up Colin de Grandhomme and Mitchell Santner before Tim Southee was run out in a horror mix-up, with Blundell swinging his bat before he was caught by Lyon off Marnus Labuschagne.

Paine earlier declared Australia's second innings on 168 for five after Head was bowled by Neil Wagner for 28. Matthew Wade was unbeaten on 30 with Wagner taking 3-50.

They had resumed at 137 for four, building on their first innings 467.

Kane Williamson Australia vs New Zealand, 2nd Test Cricket
Get the latest updates on IPL 2020, check out the IPL Schedule for 2020 and Indian Premier League (IPL) Cricket live score . Like us on Facebook or follow us on Twitter for more sports updates. You can also download the NDTV Cricket app for Android or iOS.