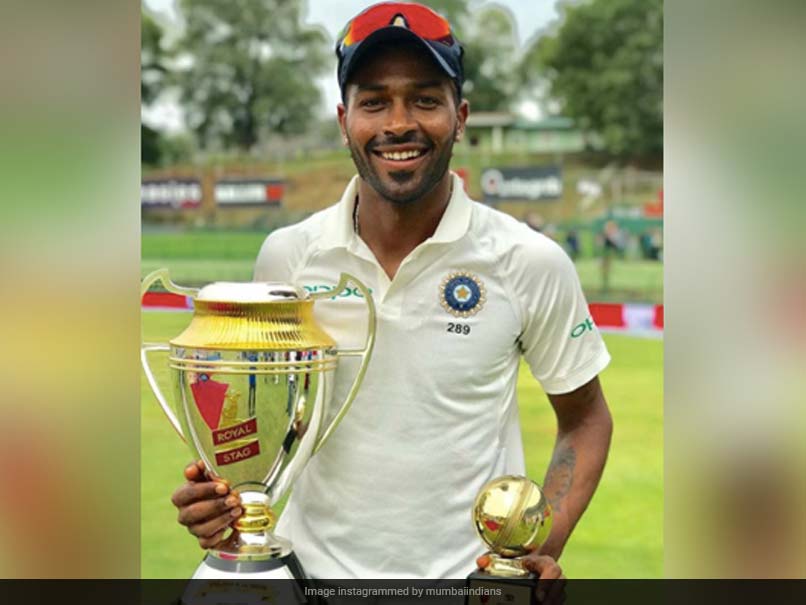 Hardik Pandya, who recently became a father, had another reason to celebrate on this day three years ago when he scored his maiden Test hundred. Hardik's IPL team Mumbai Indians posted a throwback picture on social media where the all-rounder can be seen posing with a Player of the Match trophy as well as the series-winning trophy after India beat Sri Lanka in the third Test during the 2017 tour. Hardik Pandya scored a hundred off just 86 balls, which is the fastest by an Indian batting at No.8 as he did in India's only innings in the Test.

Pandya hasn't played any competitive cricket since turning out for India in T20Is against South Africa in September 2019. Successive attempts to return to the Indian team were foiled by injuries but with an extended downtime due to the COVID-19 pandemic and the IPL set to begin from September 19, Pandya could finally return to action.

Mumbai are the only team to have won the IPL four times and would look to add a fifth title to their kitty. The IPL has been moved to the UAE this year due to the impact of the COVID-19 pandemic in India, which has the third-highest number of COVID-19 cases in the world.

The IPL 2020 final is likely to be played on November 10 and matches will be played in three cities - Dubai, Abu Dhabi and Sharjah.

Hardik Pandya Cricket
Get the latest updates on ICC T20 Worldcup 2022, check out the Schedule and Live Score. Like us on Facebook or follow us on Twitter for more sports updates. You can also download the NDTV Cricket app for Android or iOS.