MS Dhoni was seen playing a men's doubles match of the Tennis Championship at the JSCA stadium in Ranchi. 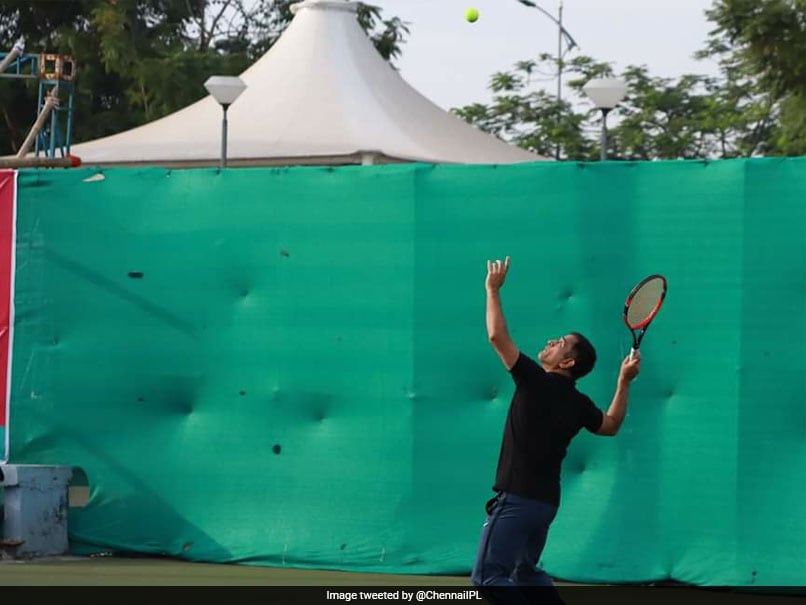 MS Dhoni displayed his skills on the tennis court.© Twitter

MS Dhoni has been away from cricketing action for quite some time now but he couldn't keep himself away from playing a sport as he was seen participating in the Tennis Championship at Jharkhand State Cricket Association (JSCA) International Stadium in Ranchi. In a video shared by one of MS Dhoni's fans, the former India captain can be seen returning a serve in a men's doubles match. It was not the first time MS Dhoni participated in a tennis tournament held in his hometown. Last year he won the JSCA Country Cricket Club Tennis Championship in Ranchi.

Chennai Super Kings (CSK) also shared a picture of their captain MS Dhoni serving the ball in the tournament and captioned it, "The King, at your service".

Check out MS Dhoni's video and pictures from the tournament:

.@msdhoni and his doubles partner Sumeet clicked with their opponents after the first round earlier today.

Master of all sports!

This one is for all @msdhoni fans who were missing him in action. Here's your weekend delight.

Mahi is back in action, playing his first match of Tennis Championship in JSCA, Ranchi.#MSDhoni #Dhoni #RanchiDiaries pic.twitter.com/kLaLol0mU4

Dhoni had also showed his love for tennis during a Indian Premier League (IPL) match between CSK and Delhi Capitals last season. Dhoni had then used the tennis racquet to send the balls as far as possible to the fans seated in the top tiers of the Chepauk stadium.

On the work front, there is immense speculation surrounding Dhoni's future, ever since he made his last international appearance during the World Cup 2019.

Dhoni had taken a two-month sabbatical from cricket after India lost the semi-final against New Zealand in the World Cup 2019. Although the end date of his sabbatical is not clear, the break saw him opt out of the West Indies tour.

Following that, he was not included in India's squad for the Twenty20 International (T20I) series against South Africa and Bangladesh. It still remains to be seen if he makes a comeback for the limited-overs series against the West Indies starting from December 6.