Watch: Mohammed Siraj Shines On County Debut With A Five-Wicket Haul For Warwickshire

Mohammed Siraj conceded 82 runs while bowling 24 overs during his five-wicket haul. He bowled 6 maiden overs and his bowling economy was 3.41. 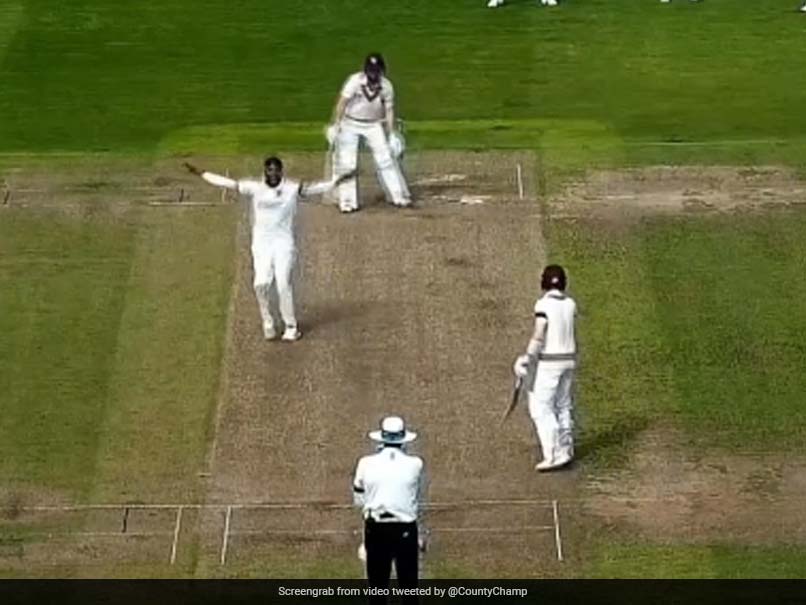 Mohammed Siraj appeals for a wicket during Warwickshire's County match.

Mohammed Siraj might not be with the Indian team at the moment but the player is making sure he leaves no stone unturned to keep improving and be a better version of himself. The seamer made his County cricket debut at Edgbaston, Birmingham while playing for Warwickshire against Somerset. The Indian pacer duly impressed in his maiden appearance by picking five wickets that too in the first innings of the game itself. Siraj's effort helped Warwickshire bundle out Somerset for 219 runs.

Siraj started with the wicket of Pakistan batter Imam-ul-Haq, providing his side an early breakthrough in the game. He then got the better of George Bartlett before dismissing James Rew. The other two wickets claimed by Siraj were of Josh Davey and Lewis Gregory.

The Indian pacer conceded 82 runs while bowling 24 overs during his five-wicket haul. He bowled 6 maiden overs and his bowling economy was 3.41.

Mohammed Siraj finishes with figures of 24-6-82-5 as Warwickshire bowl Somerset out for 219. #LVCountyChamp pic.twitter.com/jneZp5ZcDj

Recently, Siraj said that he was consciously looking on improving his consistency with his line and length, rather than thinking about wickets.

"In West Indies and England also I bowled well, my rhythm was good in the first match as well, so my plan was to hit an area consistently without worrying whether I will get wickets or not," Siraj, who took one wicket for 16 runs in eight overs, said in the post-match press conference.

With 40 wickets in 13 Tests, Siraj has impressed in red-ball cricket but he lacked consistency in white-ball game. Asked if he had made any changes for white-ball cricket, Siraj said: "I just kept belief on myself, because ups and downs are part of everyone's life, so I just kept belief that I can do it no matter if it is a white ball or red ball.

"So just wanted to keep hitting the right areas and bowl dot balls to build up pressure on the opposition. Starting with the new ball, I went for wickets a few times but as you know white ball doesn't swing much, so I was planning to consistently hit one area and bowl maiden overs."

Comments
Topics mentioned in this article
Cricket Mohammed Siraj
Get the latest updates on Fifa Worldcup 2022 and check out  Fifa World Cup Schedule, Stats and Live Cricket Score. Like us on Facebook or follow us on Twitter for more sports updates. You can also download the NDTV Cricket app for Android or iOS.